Computex 2012 - Moving away from the G2 / Gamer series name it looks like Patriot is expanding upon the popular Viper name that we've seen them use for their high end Viper Extreme memory kits over recent time. The new Viper kit from Patriot are set to launch later this month in four differant colors that represent four differant kind of markets.

At the top we've got the Black version which main focus is speed with the kit we saw on display today coming in at 2133MHz DDR using a 11-11-11-30 @ 1.5v setup. Outside of the heatsink, though, what has really grabbed our attention is the Black PCB which we hope Patriot uses. 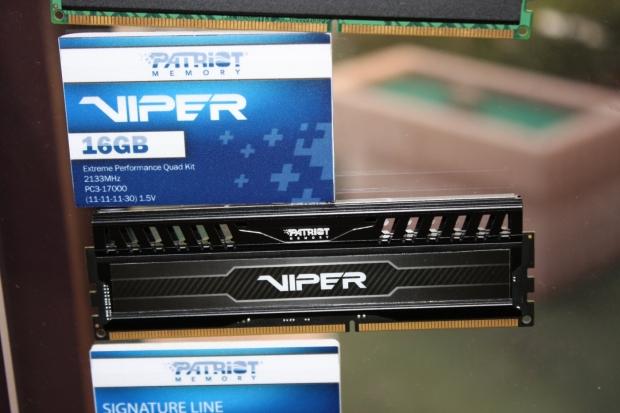 The bottom end of the scale will see a Green kit which will focus on lower voltages while a red and blue kit will sit inbetween aimed at differant segments. Of course if you're after the highest speeds you'll want to look at the Viper Xtreme Kit. If you're looking for some quality RAM at a strong price point, though, the new Viper series due out soon could be what you're after. We've already organised samples so keep an eye out for a review in due time.