It would seem that PowerColor is the first GPU manufacturer to spill the beans on the upcoming 7970 X2. The new GPU will be based upon two 7970 Tahiti cores, which is the top chip made by AMD. This card is being designed to compete with the NVIDIA GTX 690, which is the current king of the video cards. 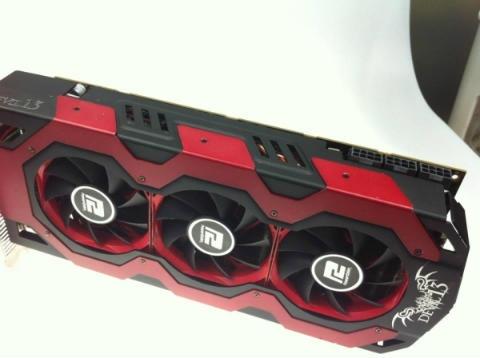 The new GPU will be cooled by PowerColor's new monster Vortex III. This new cooler was designed specifically for the new Devil 13 7970 X2 and is huge as you can see by the picture above. It features three fans blowing onto a massive heatsink and takes up 3 slots, as seen by the picture of the backplate.

The new GPU is adorned in red and black and looks beautiful. But it's not all about beauty as the card appears to have some monster stats to go along with the beauty. It will feature a total of 4096 stream processors across the two chips and have a total of 6GB of memory available. The cores will be clocked at 1GHz and require a ton of power. The card is outfitted with three 8-pin PCIe power connectors and has a TDP of 525 watts. The card should make an appearance at Computex early next month. More should be known then.