"Industry sources" are reporting that the next-generation AMD architecture code-named "Piledriver" will commence production in Q3 2012. Bulldozer, Piledriver's predecessor, was only released in October of 2011, so this could match Intel's one year release cycle. Trinity, an APU based upon Piledriver was released just last week. 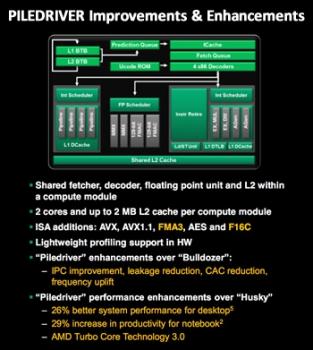 The upcoming CPU will continue to be based upon the AM3+ platform. This simple fact should keep enthusiasts happy and will allow for current Bulldozer users to upgrade for only the cost of a CPU. AMD has always had a history of retaining sockets and providing upgrade paths whereas Intel often kills off sockets with each new processor.

Piledriver will be very similar to Bulldozer in that it will be made on a 32nm process and feature the same compute module design. Piledriver will also retain the same dual-channel 1866MHz DDR3 memory controllers. Piledriver will continue to feature AMD's Turbo Core at version 3.0. The new CPU will deliver more performance, thanks to an improved IPC, at lower power usage, thanks to AMD's new energy-recycling technology called resonant clock mesh.