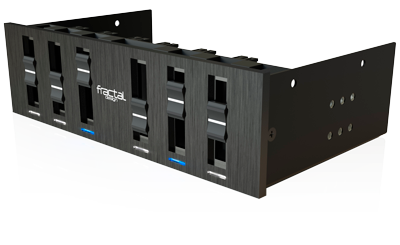 The device has some other unique features that I have never seen on any other device. One of the coolest and most useful features is that it features a jumper to change the intensity of the LED. This is something that I have often wanted on many cases and other devices, so for it to finally be included on something is awesome.

The new Adjust 108 fan controller from Fractal Design offers a simple yet clean option to adjust the speed of your case fans. With a brushed aluminum front panel and smooth moving sliders, it does not only emanate quality but also robustness and preciseness.

The Adjust 108 Fan Controller manages a total of six fans with a maximum of 36W per channel, while grouped three by three for ease of use. With a bi-color LED beneath each of the six sliders, the controller shows the speed of the fan not only by the slider itself but also through the color of the LED; white indicates a low RPM and blue a high RPM.