If you haven't heard of 'Tizen', here's a quick introduction: Tizen is a joint-effort operating system being developed by Intel and Samsung. Tizen is an open-source Linux-based OS with a heavy focus on HTML5 and other web standards. Tizen also borrows from MeeGo, a failed OS that was a mash-up of Intel's Moblin and Nokia's Maemo. MeeGo was officially discontinued in September 2011 in favor of Tizen.

Some lucky few people at the Tizen developers's conference in San Francisco were given prototype Samsung devices loaded with version 1.0 of the new OS. The guys and gals over at The Handheld Blog were there in person and have a video showing off the device.

The Samsung unit sports a 4.65-inch Super AMOLED screen, a Cortex-A9 1.2GHz processor, 1GB of RAM, 16GB of storage, an 8-megapixel rear-snapper, 2-megapixel front-facer, microUSB, Wi-Fi, GPS, NFC and a standard video/audi decoder. Quite the feature-packed device, I'd say. As you can see in the above video, the OS borrows quite a lot from Samsung's TouchWiz UI including its pull-down notification system and support for tethering directly out of the box. 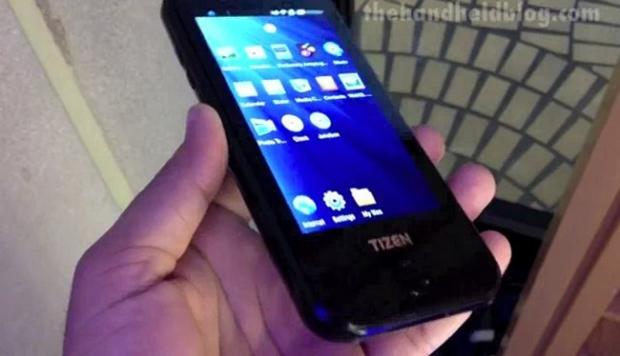 Integrated Facebook, Google and Twitter account support also make it very simply to sync contacts from your social network. Remember that this is just a barebones version of the OS, and is by no means a representation of the final product. Expect to see many features, fixes and tweaks when the OS is launched.