Once again, I get to be the bearer of bad news in order to keep you, our reader, safe. This time I bring news of a new malware that is going around dubbed "ransomware" due to the fact it locks up your computer until you pay the ransom amount demanded. This isn't a completely new idea, but this is a new strain and variation. 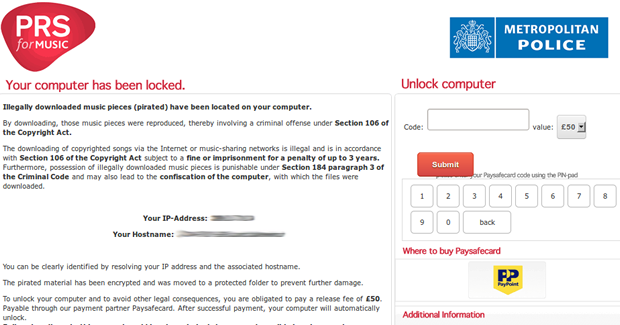 This latest campaign is mainly targeting the UK and a few other European countries and claims that illegally downloaded music has been found on the computer. Due to this illegal material, the malware claims that "to unlock your computer and to avoid other legal consequences, your are obligated to pay a release fee of 50 pounds."

The malware was spotted by security watch blog abuse.ch. According to them, the malware is delivered through an exploit known as "Blackhole." The ransomware also carries a payload of Aldi Bot which steals banking information. The message to take away here is to keep all your browsers and their add-ons up to date, as this is how Blackhole functions. Anti-virus isn't a bad idea either.