If for some reason you just can't wait for the official announcement of the upcoming Trinity platform, then do I have some good news for you. Chinese site EXPreview has supposedly come across AMD presentation slides which detail the upcoming APU. The slides do look to be legitimate as some of the details match what AMD has already released. 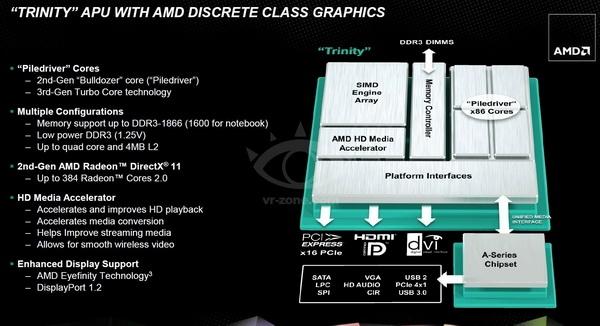 AMD has already made public that the new Trinity APU will feature the updated Bulldozer CPU cores dubbed Piledriver. The slides purport that the new cores will process more instructions per clock while leaking less power. The APUs are set to come in dual- and quad-core versions that range from 2.0GHz to 3.8GHz. The TDP appears to top out at 100W.

The lower clock speeds are partially expected due to the fact that the CPU shares its die with a powerful graphics processor. Speaking of the graphics processor, the GPU included on die has up to 384 ALUs which can clock all the way up to 800MHz. The GPU appears that it takes up over half of the silicon die.

The die is, if the slides are right, 246mm2, which is slightly bigger than Llano and quite a bit larger than Ivy Bridge, even though Ivy Bridge has more transistors. This is because Ivy Bridge is built on a 22nm process whereas the new Trinity APU will be built using a 32nm SOI process. Once the official launch date comes, we will be able to confirm this information. Stay tuned.