Autodesk have been tinkering with their video editing and post-shot visual effects tool, Smoke, and will release it later in the fall. Smoke 2013 brings a bunch of new features, such as a unified interface that mixes the traditional, editorial track-based editing with Autodesk's own interface elements. 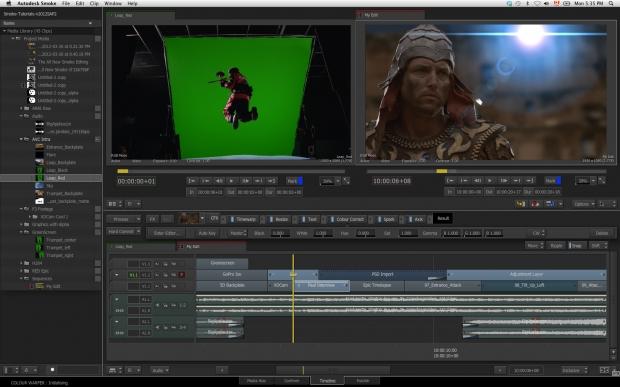 A node-based compositing tool, ConnectFX, allows editors to insert advanced effects without having to jump to a separate interface. New specific tools make the jump to the 2013 edition of Smoke, including a Color Warper for pro color adjustment, a Master Keyer for faster chromakey editing for green screens and stereoscopic 3D editing, and a 3D visual effects workflow with real 3D effects for elements like logos and titles.

All media is also put into a central area, called the MediaHub. Hardware requirements have been actually lowered, and not increased for Smoke 2013, where users can also now take advantage of Thunderbolt-based external drives and video peripherals to get the same kind of editing one would receive from the high-end Mac Pro.

Video format support is quite good, and includes Apple's ProRes 4:2:2, ARRIRAW for Arri cameras, DNxHD and RED's Redcode. Smoke 2013 won't ship until later in the fall, and will cost $3,495 per license.