President Obama did what he does best at his State of the Union speech, talked. Obama can say a lot, and not really mean it. He comes across as this beacon of light that is going to introduce change, but nothing really changes. He allows no reform, employs half of Wall St, ex-bankers and ex-CIA to be his left and right-hand men and women. 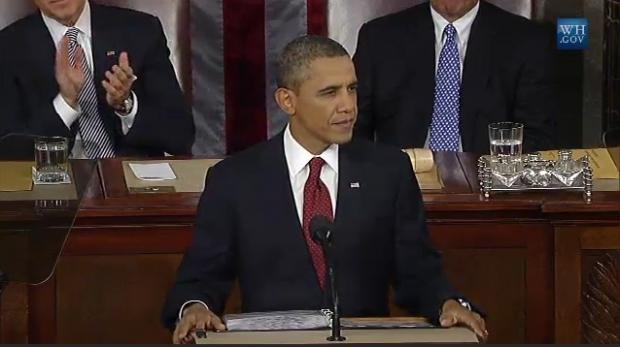 Anyway, he has laid out his plans for an economic recovery where he references the technology sector and said:

An economy built to last is one where we encourage the talent and ingenuity of every person in this country.

Steve Jobs' wife, Laurene Powell Jobs was in the audience at this time, when Obama said:

That means women should earn equal pay for equal work. It means we should support everyone who's willing to work; and every risk-taker and entrepreneur who aspires to become the next Steve Jobs.

Now, this is where I find it weird. Yes, Jobs did amazing things for Apple, but America? He shipped tens of thousands of jobs to Asian countries, where labor is cheap, to keep Apple profits, at now record-breaking levels. If Jobs had opened plants up in America, employed tens of thousands of American citizens, and just took a hit on Apple profits, then I would be more than over-the-moon for him.

TechCrunch have been kind enough to nab the most relevant passages, where Obama says:

Tonight, my message to business leaders is simple: Ask yourselves what you can do to bring jobs back to your country, and your country will do everything we can to help you succeed.

Right now, companies get tax breaks for moving jobs and profits overseas. Meanwhile, companies that choose to stay in America get hit with one of the highest tax rates in the world. It makes no sense, and everyone knows it.

No American company should be able to avoid paying its fair share of taxes by moving jobs and profits overseas. From now on, every multinational company should have to pay a basic minimum tax.

If you're a high-tech manufacturer, we should double the tax deduction you get for making products here. Send me these tax reforms, and I'll sign them right away.

I also hear from many business leaders who want to hire in the United States but can't find workers with the right skills. Growing industries in science and technology have twice as many openings as we have workers who can do the job. Think about that - openings at a time when millions of Americans are looking for work.

Join me in a national commitment to train two million Americans with skills that will lead directly to a job.

Let's also remember that hundreds of thousands of talented, hardworking students in this country face another challenge: The fact that they aren't yet American citizens. Many were brought here as small children, are American through and through, yet they live every day with the threat of deportation. Others came more recently, to study business and science and engineering, but as soon as they get their degree, we send them home to invent new products and create new jobs somewhere else. let's at least agree to stop expelling responsible young people who want to staff our labs, start new businesses, and defend this country. Send me a law that gives them the chance to earn their citizenship. I will sign it right away.

You see, an economy built to last is one where we encourage the talent and ingenuity of every person in this country. That means women should earn equal pay for equal work. It means we should support everyone who's willing to work; and every risk-taker and entrepreneur who aspires to become the next Steve Jobs.

After all, innovation is what America has always been about. Most new jobs are created in start-ups and small businesses. So let's pass an agenda that helps them succeed. Tear down regulations that prevent aspiring entrepreneurs from getting the financing to grow. Expand tax relief to small businesses that are raising wages and creating good jobs. Both parties agree on these ideas. So put them in a bill, and get it on my desk this year.

Don't let other countries win the race for the future. Support the same kind of research and innovation that led to the computer chip and the Internet; to new American jobs and new American industries.

The new rules we passed restore what should be any financial system's core purpose: Getting funding to entrepreneurs with the best ideas, and getting loans to responsible families who want to buy a home, start a business, or send a kid to college.