Earlier today Shane Baxtor and I ventured out to the ECS headquarters here in Taipei where we were given exclusive access to look at the Taiwanese motherboard company's range of upcoming Intel Ivy Bridge motherboards that are due to come out onto the market sometime in late March or April as far as we can tell.

In the video above we spent most of our time focusing on ECS' most high-end Ivy Bridge motherboard, the Z77HS-AX Black Extreme. This is a full size ATX motherboard with plenty of the bells and whistles ticked including onboard Bluetooth 2.1 and Wi-Fi as well as native USB 3.0 provided by the Intel Ivy Bridge chipset. It also gets some other nice goodies such as onboard power and reset buttons as well as a heatpipe cooling design which looks like it should do an adequate job of keeping things under control in the temperature department. 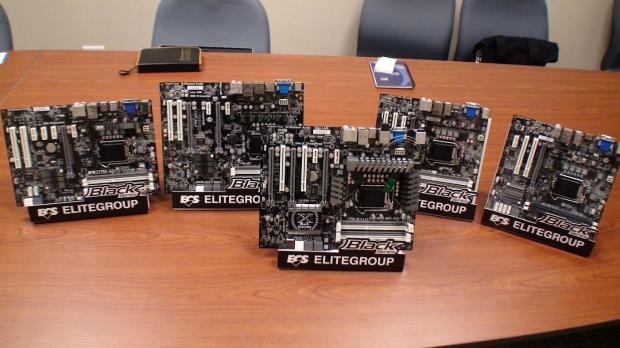 Some of the big features of this board is the inclusion of not two, but three PCI-E x16 3.0 slots which allows for SLI and CrossFireX support. The first slot is 16 lanes while the other two other eight lanes - ECS was able to achieve the extra lanes by adding in an additional chip which is said to cost $30 alone. As far as memory goes, you get support for DDR3 dual channel and in early testing so far, ECS engineers told us that they have been able to reach over 2600MHz DDR so far.

The ECS Z77H2-AX Black Extreme Ivy Bridge motherboard looks good and seems to tick all the features we're looking for, but only time will tell if it is a board you actually want to own. We spent a good part of our meeting with around 7 or 8 staff from ECS and discussing their BIOS engineering as well as overclocking and they agreed it's something they need to improve on and it is something they are putting a lot of effort into improving right now.

We look forward to getting this board and other ECS Ivy Bridge boards in for testing to see what they can do!