OCZ Technology have been snapping up companies lately and today is no different with the acquisition of SANRAD Inc., an Israel-based provider of flash caching and virtualization software and hardware. The addition of intellectual property to OCZ's growing portfolio is expected to increase the adoption of PCIe SSD storage solutions specifically in VMware and Citrix Zen environments. 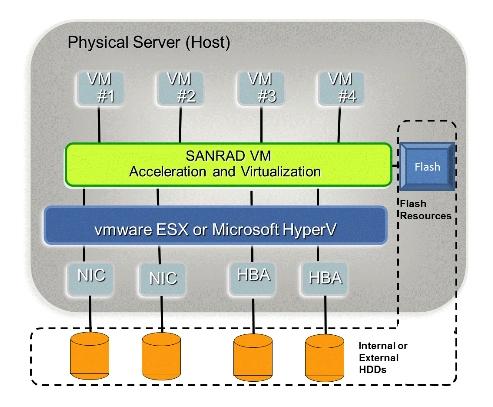 SANRAD currently sells its flash caching and virtualization software to OEMs such as NEXSAN and Brocade. The deal between OCZ and SANRAD is reportedly worth approximately $15 million, which consists of approx. 2.1 million shares of OCZ stock. From the press release:

SANRAD's VXL software delivers SANRAD's flash caching and virtualization technology for VMware vSphere, Microsoft Hyper-V and Citrix Xen into server virtualization platforms. VXL software enables efficient dynamic distribution of host-based flash resources to guest virtual machines via its application optimized cache engine. The VXL SCSI connectivity enables support of most modern operating systems including all variants of Windows, FreeBSD, Solaris and Linux servers, in contrast to other caching solutions which require an installation of an agent or driver on each VM.

VXL supports key enterprise-class storage datacenter requirements such as QoS, high availability clustering, mirroring, WAN replication, snapshots and multiple storage virtualization functions. Unlike many other virtualization and caching algorithms, VXL guarantees complete cache migration via vMotion, as cached data is treated as a virtualized storage entity and can be dynamically migrated between ESX servers along with the virtual volumes without performance loss and without powering down the server, interrupting service of the VMs.