Samsung have a duo of products to release before Christmas, in the form of two new dual-SIM Android-powered handsets. The Galaxy Y Duos sports a 3.14-inch QVGA (243x320) touchscreen, 834MHz processor, HSDPA, a 3-megapixel rear-facing camera, and software wise we have Google's Android 2.3 Gingerbread. 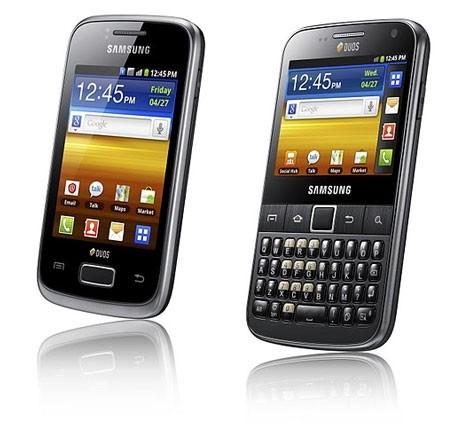 The Galaxy Y Duos Pro is the same handset inside, but features a smaller 2.6-inch LQVGA TFT screen so make space for its physical keyboard. The new devices will hit Russia in January 2012, with the Galaxy Y Duos rolling out to Europe, CIS, Latin America, Southeast and Southwest Asia, Middle East, Africa, and finally, China.

Galaxy Y Pro Duos will arrive in Europe, CIS, Latin America, Southwest Asia, Middle East and Africa. Both phones sport the great feature of dual-SIM, which can be handy for those who want to either have one side for business, one for pleasure. Alternatively, if one carrier has better offers at certain times (or more data allowance), and then you could switch to the other SIM for everything else.

JK Shin, President of IT and Mobile Communications Division at Samsung Electronics says:

With the tremendous success of the Dual SIM feature phones, we are now very pleased to be introducing the first Dual SIM smartphones powered by Android. We have been actively exploring this market and are well aware of the need for Dual SIM smartphones. With the GALAXY Y DUOS and the GALAXY Y Pro DUOS, Samsung will be offering more choices for all consumers.