We've had a fair amount of news on AMD's next-generation GPUs over the past six weeks, with the first news that the cards would be launching in January, then we had some rumored pricing, and then a few days ago we posted some leaked info on the AMD Radeon HD 7970 specs. Today, we have news of the feature-set that will be included on the GPU when it launches. 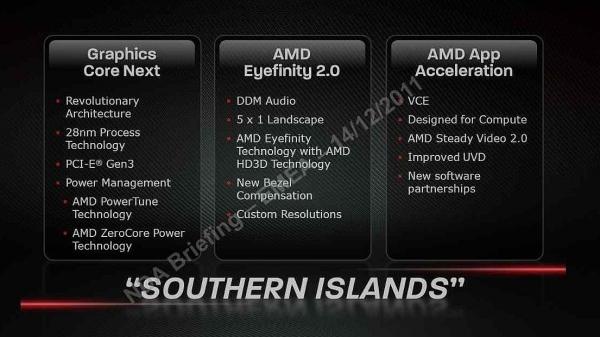 There are three main categories of feature updates: Graphics CoreNext, AMD Eyefinity 2.0 and AMD APP Acceleration. AMD have claimed that CoreNext will be a "revolutionary" new architecture that changes the way the GPU crunches numbers. Also keep in mind that GCN is the first new architecture since the HD 2000-series launches all those years ago.

The first five generations since the HD 2000-series launched all included VLIW (very-long instruction word) core arrangement. CoreNext replaces the now ageing VLIW4 that was introduced by the Radeon HD 6900-series cards, which was an evolution, not a revolution of the VLIW set. CoreNext replaces VLIW stream processors with super-scalar Graphics Compute cores.

What this should provide, is higher performance per mm die-area, resulting in smaller GPUs, which gives AMD room for more cost-cutting if the competition from NVIDIA comes into play and can keep up or better it. The GCN itself is built on TSMC's new 28nm silicon fabrication process and AMD have also confirmed that GCN will support PCI-Express 3.0, which offers double the system bus bandwidth over the previous PCI-Express 2.0 spec. 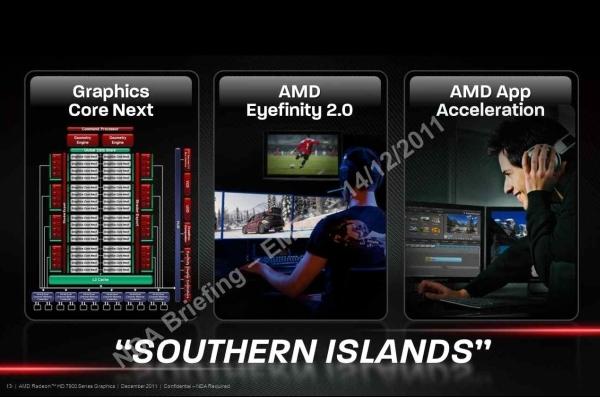 Power management has been a key feature for AMD in the past couple of years, and the new GCN does not miss out at all. AMD includes their PowerTune technology which adjusts clock speeds both ways (both below and above specifications), to remain within a set power envelope. Then we have ZeroCore technology, a feature that will completely turn off the GPU when the operating system instructs it to "turn off monitors" with idling.

This reduces power consumption of the GPU to under an amazing 3W, that's a 10-fold power reduction over the previous generation GPUs. With CrossFire setups, it will send the non-primary GPU into the ZeroState state while keeping the primary workhorse primary GPU awake, when the user isn't running 3D-intensive tasks.

Eyefinity 2.0 gets the next dab of baked in goodness, with the first on the table being DDM audio. DDM audio is a directional audio system that outs independent 7.1 channel audio streams through each of the HDMI and DisplayPort connectors. When you move an audio output-producing application's window from one display to another, its audio stream dynamically shifts from one connector to the other. Impressive, huh!

One use of this, would be gaming on your normal setup and having a second HDMI cable out to your Home Theater or Lounge and dragging a movie across to the other screen, where it would dynamically shift the audio track across. Very useful. Eyefinity 2.0 also keeps support for 5 x 1 landscape arrangement and also now includes support for HD3D, display of stereoscopic 3D from each member display while compensating for the display's angle to the user's perspective and bezel.

Finally, the APP runtime includes some new features that will take advantage of the more powerful GPU compute architecture these new GCN's include. It is designed for heavy computing loads, will feature SteadyVideo 2.0, which further enhances videos after compensating for camera shake, Improved UVD could mean more video decoding features.

Home 3D is the new 'big thing' which means the new UVD engine could address some performance issues in relation to that. Exciting times for AMD in the coming weeks! We should have our review of the AMD Radeon HD 7000-series in the near future.