ARM has unveiled a new chip that is set to enable more efficient and affordable mobile processors. Cortex A7 is based on ARM's 28nm fabrication and reportedly consumes five times less power and measured just one-fifth the size of the 45nm Cortex A8, which is found inside Apple's A4, Samsung's Hummingbird and Texas Instruments' OMAP3. 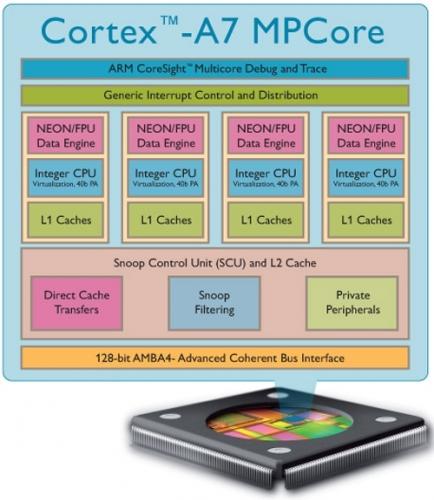 ARM will compliment the efficiency by pairing the Cortex A7 with quicker, more power hungry processing cores. The A7 is set to pave the way for sub-$100 smartphones, which will boost adoption rates in developing regions. ARM CEO, Warren East told the BBC:

We can see the developed world moving on and mobile being the nexus for all sort of consumer electronics. In the Bric countries (Brazil, Russia, India and China) we are seeing catch-up. As we look forward these smartphones are going to be totally ubiquitous and in the much less developed areas...

ARM's "Big.LITTLE" design concept will see the Cortex A7 partnered with the upcoming Cortex A15 as a system-on-a-chip (SoC) that will allocate tasks to the best available core. The A7 will deal with lighter loads while the A15 will handle more complicated tasks. Efficiency gains that were mentioned above are specifically limited to the A7, so its currently unclear what to expect from the whole package.

The A15 was announced last September and should ship in early 2012. It will sport varying clock speeds, up to 2.5GHz and is set to deliver 40-percent more performance than the current A9. Several licensees have already announced next-generation SoC's based on the A15, including NVIDIA's fourth-generation Tegra, "Wayne", Texas Instruments' OMAP 5 and ST-Ericsson's Nova A9600.

Samsung, LG and Apple will most likely use A15 processors, too.