Thanks to a chunky roadmap leak via a Chinese forum earlier today, we can gather up some more spicey details on Intel's upcoming Ivy Bridge CPUs and associating platforms; also removing some of the haze thats still been surrounding it in terms of TDP ratings and backward/forward compatibility characteristics. 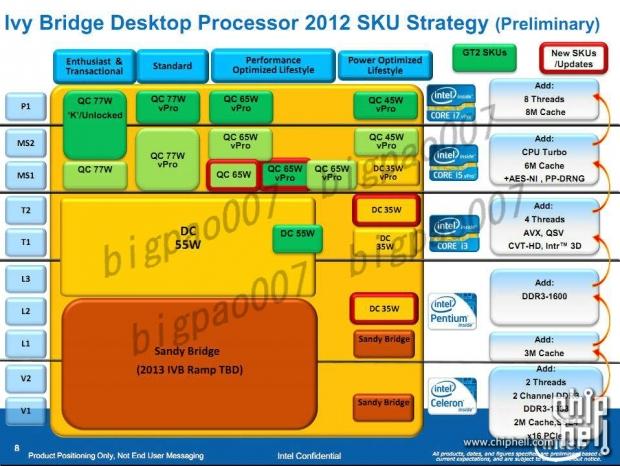 If said roadmaps are the real mcCoy, we can look forward to a maximum TDP of just 77W for the high-end models which is a good drop lower than the 95W peak for Sandy Bridge thanks to the brand new 22nm fab process. The diagram above seems like a bit of a dogs breakfast at first, but if you focus primarily on the upper region that's where the more interesting tid bits lie.

We can ascertain from this chart that just like Sandy Bridge, there will be unlocked 'K' series SKUs for Ivy Bridge as well; these of which top out at the aforementioned TDP of just 77W. Looking further down the chart, there are entries for quad core 65W 'S' and 45W 'T' SKUs not unlike Sandy Bridge, and also an SKU entry for a 35W dual core. 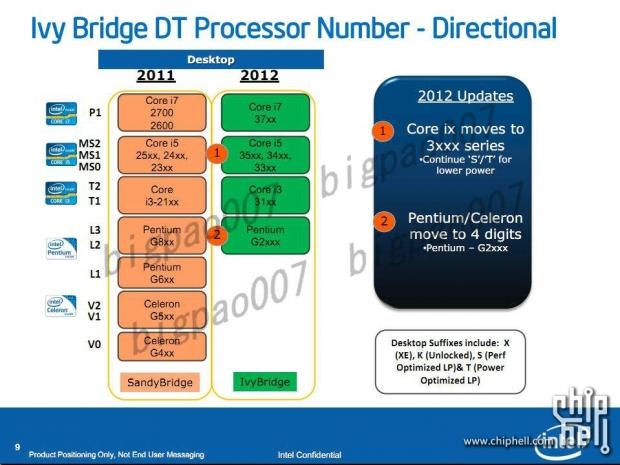 Looking a step down from there are the Ivy Bridge Core i3s which come in at TDPs of 55 or 35W, then resting at the entry level point is just a single standard wattage Pentium SKU and a "power optimized" SKU which gains DDR3 1600MHz support (along with the other SKUs). The chart also indicates at the bottom most segment that the rest of Intel's Pentium and Celeron processors will remain in Sandy Bridge form until sometime in 2013. More details including the backwards and forwards compatibility side of things can be had via the source links below.