Intel's roadmap for 2011/2012 has been leaked and it is clear that Intel wants to give their SSD portfolio the same non-stop product cycle that their processor lineup enjoys, where we receive generation leaps every year or so. Intel will start 2012 with products that have been introduced just recently such as the SSD 520 "Cherryville", SSD 710 "Lyndonville", SSD 720 "Ramsdale", and "Hawley Creek" mSATA SSDs. 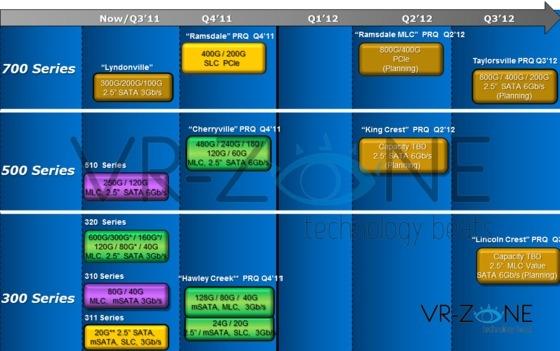 Most of these will launch in Q4 2011 where Intel will allow these products to lead the portfolio for the remainder of the year and until the end of Q1 2012. In Q2 2012, Intel plans to launch "Ramsdale MLC" which is a variant of "Ramsdale" Intel SSD 720 series PCI Express SSDs, which sport 25nm MLC-HET NAND flash memory instead of SLC NAND flash found on the normal "Ramsdale". MLC-HET gives Intel the ability to double capacities, whilst offering the same kind of endurance to SLC, and much higher price per gigabyte.

It does come at a cost though, slower throughput. This is where Ramsdale MLC is not really a replacement, but just an extension of the 700 Series PCI Express family. At this time, Intel will launch "King Crest", which is a successor to the SSD 520 "Cherryville" family. This is definitely an increase in tech, which uses 25nm MLC-HET NAND flash instead of regular 25nm NAND flash that is found on the SSD 520. Capability wise, there shouldn't be any surprises, but endurance, sequential data-rates and throughput should be increased. Also like the SSD 520, "King Crest" will be a 2.5-inch form-factor with a SATA 6 Gbps interface.

Q3 2012 is when the real fun begins, where we'll see "Taylorsville". This is the successor to SSD 710 "Lyndonville", where we'll see big increases in capacities. It too will sport MLC-HET NAND flash, and the 2.5-inch form-factor, as well as the standard SATA 6 Gbps interface. We should expect 200, 400 and 800GB capacities.

Finally, we have "Lincoln Crest", which is the successor to the SSD 320 series. These drives are set to mark the transition of Intel's mainstream-thru-value SSDs to the SATA 6 Gbps interface. It will use the MLC-HET NAND flash, which will make it more durable when compared to the SSD 320 series. Fun times ahead, storage and SSD fans!