Start-up company BlueStacks has rubbed their hands together and produced some magical app that allows Android apps to run on all Windows PC, as it is ready to start publicly testing its software. BlueStacks is making an alpha of its software available to the public. But their long-term goals are to have both a free and a paid version of its software and to have it loaded onto new PCs. The alpha version of the software allows most (not all) Android apps to be loaded onto a PC, but prohibits some games such as Angry Birds and Fruit Ninja - which will be left for the paid version of the app.

BlueStacks VP, John Garguilo said in an interview "We're very happy with the degree to which apps work, not every app will work perfectly." That I agree with, we can't expect every app to work perfectly, but for just an app to appear [for what seems] out of nowhere, this is a magic day indeed. BlueStack's app will actually ship with several Android apps already preloaded and users will have the ability to push programs from their phone or tablet to the PC from a program that will be on the Android market. 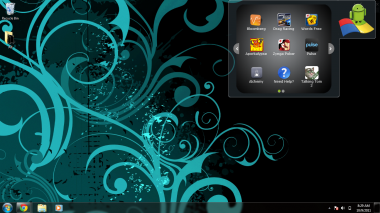