Zynga is holding a press event tomorrow in San Francisco dubbed "Zynga Unleashed", where it is expected to share its plans on how they're going to use Facebook's new HTML5-based mobile platform. Facebook's platform was announced this afternoon and runs on Apple's iOS devices as well as across the mobile Web. It will allow game developers such as Zynga to connect versions of the same application on PC and mobile devices. 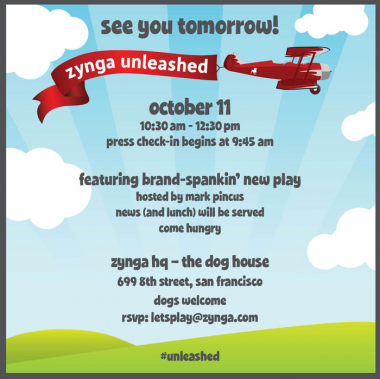 In order to achieve this, developers will build applications in HTML5, rather than the commonly used Adobe Flash technology. Zynga is expected to launch "selected titles" tomorrow, with other developers set to follow such as EA, Moblyng, Storm8 and Wooga. Zynga are quite on what they're bringing to the table tomorrow, saying to AllThingsD they "will have HTML5 games coming soon the Facebook's mobile apps site".

HTML 5 is going to allow us to bring our Facebook social games to mobile users while addressing recent fragmentation challenges faced by the industry. While Flash has worked great for us in a PC environment, it is not supported on iOS and it performs inconsistently on Android, rendering most of our Facebook games unplayable in mobile browsers.

Storm8's CEO, Perry Tam had the following to say:

Facebook has created a viral channel where millions of people can encounter our games," he said. "That definitely makes us more interested in developing for Facebook.