Other World Computing have announced the launch of the 6G Mercury Aura Pro Express (say that 3 times fast), which is a replacement SSD for the 2011 MacBook Air. The new drive fully utilizes the SATA 3 (6Gbps) interface and is available in both 120 and 240GB capacities.

The drive sports the SandForce 2200-series controller with Tier 1/Grade A NAND memory which pumps along at 507MB/sec read, 454MB/sec write speeds which is roughly twice as fast as the stock SSD in the MBA. 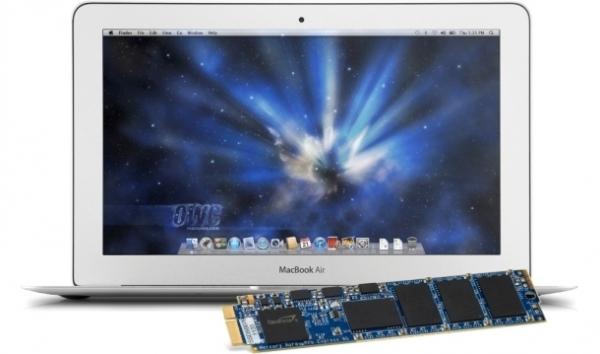 Apple's MacBook Air ships with SATA 3Gbps SSDs even though the hardware inside is capable of SATA 6Gbps. But, the MBA uses a non-standard SSD form factor, which means the usual 2.5-inch SSDs on the market can't be used as a replacement. OWC says that the Aura Pro Express 6G SSD is the first and only 6Gbps SSD designed to work with both the 11.1-inch and 13.3-inch models of the new MacBook Air.

According to OWC, the SSD provides up to 100 times the data protection of an ordinary SSD by combining the highest level of Error Correction Code and SandForce RAISE technology, along with 7-percent overprovisioning.

The drive is available now at around $345 and $600 for the 120GB and 240GB models respectively. A 480GB model will also be made available, but no release date has been announced.