Meanwhile, all sorts of drugs are somehow imported into the [super secure] borders of most countries (like the US for example), yet a little 'ol cable like the Mini DisplayPort to HDMI cables have been deemed by HDMI org to be illegal. HDMI org are the committee that oversees the HDMI specification, saying such wires are illegal and could soon disappear from stores. 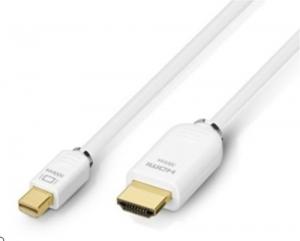 HDMI org claim that any cable with a male Mini DisplayPort connector on one side and a male HDMI connector on the opposite side is unlicensed and shouldn't be sold on store shelves. HDMI org did back up its claims with a few lines from the HDMI specification, one line says that a HDMI cable consists of only HDMI connectors, nothing else is permitted.

If that's not enough, the group also said that all HDMI products undergo compliance testing as defined by the Compliance Testing Specification. Since mDP to HDMI cables aren't mentioned in the HDMI specification, there are no tests associated with the product, so they are unable to be approved. But, cables that include a male mDP connector alongside a female HDMI receptable are fine because a licensed HDMI cable is able to be used.