Futuremark have partnered with MSI once again to kick off their infamous Lords of Overclocking competition for 2011, the largest of its type and acting as a qualifying event for the prestigious MSI MOA 2011 competition in Taipei. The event will see well known overclockers from far and wide across the globe using 3DMark 11 together with an MSI branded graphics card to compete for the title of "Lord of Overclocking" for their region. 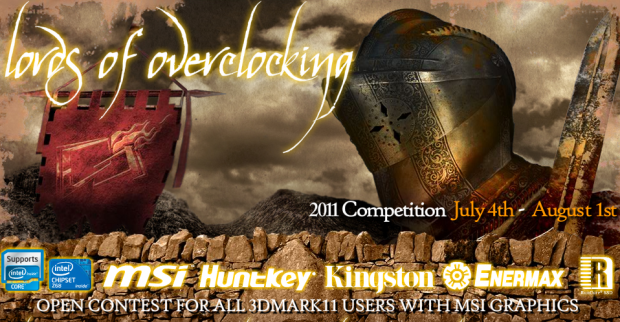 The contest will run for 4 weeks, commencing July 4 until August 1st and prizes will be awarded to the top weekly winners in each region (Europe, Asia, Africa and America) as well as prizes going to additional winners chosen at random from all qualifying entries each week. And what a prize pool it is, from the latest top-end graphics cards to motherboards, cases, power supplies and more.

We are excited to once again bring the world's most talented overclockers together for our annual Lords of Overclocking competition," said Jukka Mäkinen, Futuremark CEO. "With great prizes on offer from some of the most recognized names in PC performance it promises to be a closely fought contest."

"This is the third year MSI has partnered with Futuremark to promote Lords of Overclocking as the premier online qualifying event for MOA," said Jason Lee, Marketing Director at MSI. "Lords of Overclocking gives enthusiasts and overclockers around the world an opportunity to experience the performance, stability and quality of the military grade hardware in MSI mainboards and graphics cards in an exciting competitive setting.

For further details on the competition, head over to the official Lords of Overclocking 2011 website here. Further details and updates on the contest as it happens can be obtained via Futuremark's Facebook page.