NewsReviewsArticlesGuidesGamingAsk the ExpertsNewsletterForums
Mobile Devices
And now for the second day of Google I/O 2011, which of course brings another keynote speech to kick off the day. Yesterday we saw Android @ Home, Project Tungsten, and some pretty cool NFC demonstrations. Today Vic Gondutra started us off setting the stage (literally) for today's big topic: Chrome. After rehashing the awesome Samsung Tab that everyone in the audience received yesterday, he mentioned that they also came with Verizon Wireless Hotspots, capable of 20mps download. 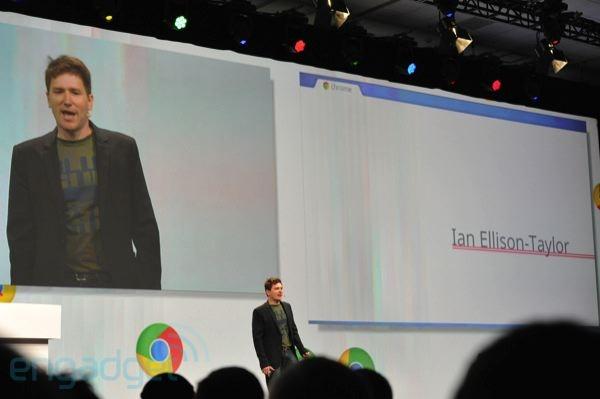 He gave the stage over to Sundar Pichai, SVP of Chrome, who briefly spoke about how awesome Chrome is- the proof of which is that Chrome has doubled their user base since last year's I/O, 160 million up from 70. He gives the stage over to Ian Ellison Taylor of Chrome, who educates the audience on some of the cool dev features, like Speech, Javascript and GPU acceleration.

Chrome now runs javascript almost exponentially better than it, or other browsers for that matter did in 2008.In addition to the javascript improvements, Chrome's GPU acceleration allows it to run tons of objects before the frames per second drop below 60. Taylor showed the ever-popular Fish Demo, starting with a 100 fish and going to 250, 500, and then 1000 before the FPS even flinched. When he ran it on WebGL, the FPS stayed above 60 all the way up to 10,000 fish swimming around.

You didn't have to do anything, (Chrome) just got faster.

Taylor then demoed Tinkercad, a web application that runs off of Chrome's inherent 3D processing and allows real-time building and modeling of 3D objects that you can easily export.

Pichai returned to the stage to close out the session, mentioning that web app users spent twice as much time on average using Chrome apps then mobile, and make 2.5 more monetary transactions on average. This is all a perfect segue to what's coming next, a discussion of in-app payments from one of the Chrome Product Managers.