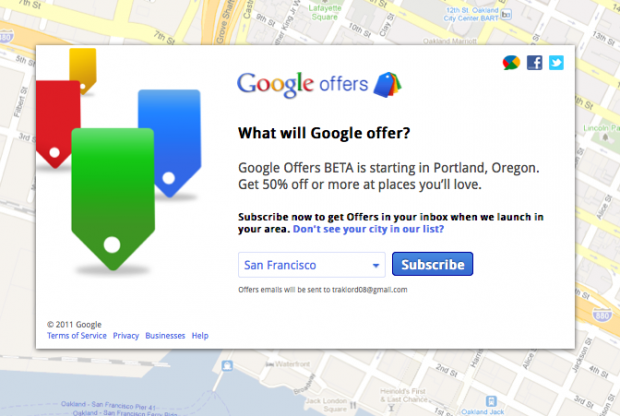 Is it me, or is the name itself kind of a stab at Groupon, re: the $6 billion offer to buy the company? Either way, the service will be launched soon, and after Portland will expand to New York City, San Francisco and evidently the greater Bay Area, according to the map in the background of the above photo, which depicts the Oakland/Berkeley region.

Google revealed the service back in January of this year, but you can now sign up at a page that claims it will begin to notify you of deals that offer, minimum, 50% off or more at local businesses. And unlike Groupon, these deals will not, I repeat, not require a minimum number of people to register in order to get the offered deal.

Google has a Help Page to answer basic questions, but little is really known regarding the logistics of the service. I'll put my money on "email-based", but that's really just a shot in the dar.
Newsletter Subscription