All NewsBusiness, Financial & LegalCases, Cooling & PSUContests & GiveawaysCPU, APU & ChipsetsDealsDisplays & ProjectorsGamingMotherboardsScience, Space & RoboticsStorageVideo CardsVirtual & Augmented Reality
All ReviewsAll ArticlesAudio, Sound & SpeakersCases, Cooling & PSUCPUs, Chipsets & SoCsComputer SystemsDisplays & ProjectorsGamingMotherboardsNetworkingPeripheralsStorageVideo Cards
GuidesGamingAsk the ExpertsNewsletterAboutForums
Windows 11Halo InfiniteBattlefield 2042Elon MuskGTA 6RTX 3080HDMI 2.1Bitcoin Mining
Mobile Devices
iPhone owner? Enjoy someone knowing your every move? When you go to work, when you get home, where you go for holidays, everything is recorded and saved onto that previous fruit-logo covered phone of yours. iPhones have been keeping a recording of everywhere you've been since June of 2010. The data is stored on your iPhone (or 3G-powered iPad) and computer, which is then accessible to anyone who gets their hands on it. 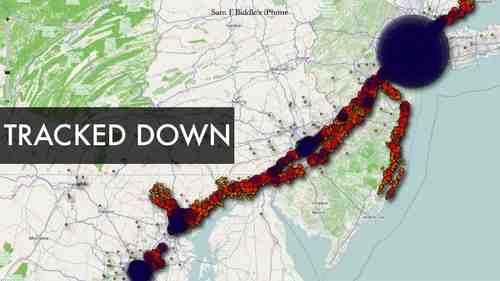 Google's Android-powered smartphones do the same thing but it's an opt-in choice. When starting up a fresh Android device, you're prompted to agree to the following "Allow Google's location service to collect anonymous data. Collection will occur even when no applications are running."

Mobile providers obviously collect this data in the case of an emergency or police investigation, they could then track your movements or provide proof that you were at the scene of a crime from GPS data. But, most people don't want this information just being recorded while your phone is in your pocket next to your junk, or junkette for female readers!

The recording of your movements began back with the release of iOS 4 and has been live ever since. There is no fix, no way of stopping this from happening - you just have to live with it. If your phone is stolen, someone will know where you live, where you've been, where you work, everything. It's an absolutely shocking discovery and there are statements from various people such as Kevin Mitnick saying this recording could be at the Government's request.

The government wanting to track your movement? Who would believe this? Well, you should. You should read this, and want to stop it from happening. Don't just roll over and take it because tomorrow could be a lot worse, the more we get used to this data collection, the more "they" will do it. The more they do it, the more you'll never feel alone. Real life isn't Big Brother, but it seems like companies and governments alike want it that way.