NewsReviewsArticlesGuidesGamingAsk the ExpertsNewsletterForums
Video Cards
CES 2011, Las Vegas - One thing that we managed to get a glimpse of while out at CES this year was an interesting demo from Both Intel and Lucid. You remember Lucid; they are the company that has been working on an ALI/Crossfire alternative. We first saw them a couple of years ago at IDF. 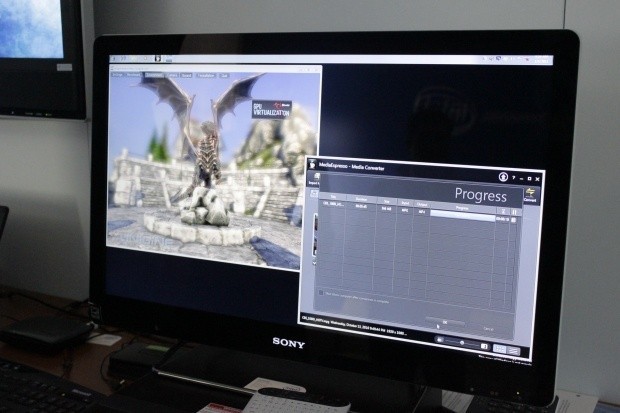 At the time Lucid was hailed as the SLI/Crossfire Killer. Unfortunately it was never meant to be positioned in that way. Still we saw companies touting it as the end a replacement for multi-GPU technology. Now Lucid has dropped down a rung or two, not by their own doing but by the pedestal that the press put them on. They are often used as a method for getting more PCIe lanes or as nothing more than a way to run SLI on an AMD motherboard. In this capacity they are actually a good solution.

So, what was is about this demo that caught our eye? Well it was a new approach to multi-GPU technology. Currently to get Lucid to work you need to have a Lucid chip somewhere on your motherboard. Well not anymore, Lucid has found a way to virtualize what the Lucid IC does. Now before you get all misty eyed thinking of software SLI let me stop you. This new tech is something different. As it stands right now it will not be for dual high-end GPUs but to partner with Sandy Bridge. You see one of the issues with Sandy Bridge is that if you run a discrete GPU you lose the Quick Sync video performance as the GPU turns off.

So what do you do if you want to game in DX11? If you are Lucid you find a way to redirect the low-level I/O from the DX11 GPU and push it out the video ports on the H67 motherboard. This means that while you are still using (and utilizing) the GPU in Sandy Bridge you are also getting the benefits of that discrete GPU you shelled out all that cash for. The software layer is intelligent enough that is can differentiate between the requests put upon the two GPUs. It is also secure from what we have been hearing. One of our concerns was that this could potentially be used as a vector for attack. However after talking with a few "people" it seems that this is unlikely due to the type of request this software handles. We hope to see more of this in the very near future and are also looking forward to seeing if this really does let you have the best of both worlds. 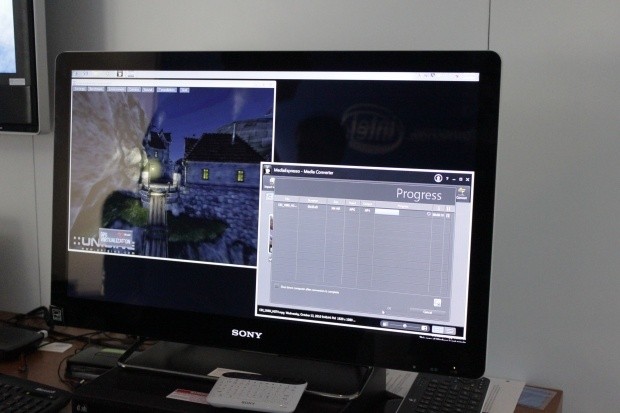 For now we just have the demo Intel showed as where they were running a DX11 test (Heaven Bench 2.0) in a window while transcoding video with CyberLink's Espresso. It was rather impressive to watch.

For those wondering, we are still asking about the potential for dual monitors allowing for seamless workloads between the two. We will let you know as soon as we hear back from Lucid on this.