All NewsBusiness, Financial & LegalCases, Cooling & PSUContests & GiveawaysCPU, APU & ChipsetsDealsDisplays & ProjectorsGamingMotherboardsScience, Space & RoboticsStorageVideo CardsVirtual & Augmented Reality
All ReviewsAll ArticlesAudio, Sound & SpeakersCases, Cooling & PSUCPUs, Chipsets & SoCsComputer SystemsDisplays & ProjectorsGamingMotherboardsNetworkingPeripheralsRAMStorageVideo Cards
GuidesGamingAsk the ExpertsNewsletterAboutForums
RTX 3090 TiRTX 4090Diablo 2GTA 6Halo InfiniteElon MuskRTX 3080HDMI 2.1
Mobile Devices
If you have your smartphone packed with music that you want to listen to while you drive in the car you are not alone. In some cars, getting the music from your phone to your car stereo is a snap thanks to a line in jack. Other cars lack a line in making you need an FM transmitter. Those transmitters are often bulky and have lots of wires that you need to deal with. If you use an Android smartphone, a new FM transmitter that needs no wires is coming next month. 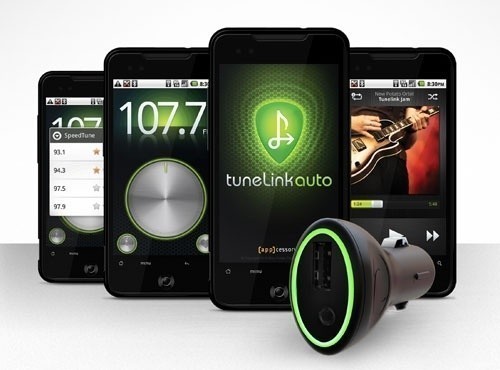 The device is called the TuneLink Auto for Android. It's a small FM transmitter that barely sticks out of the DC outlet in your car. The device uses Bluetooth to connect to your smartphone and allows the streaming of music from your phone to the car stereo. The device also has a USB port on it that you can use for charging your phone while you listen to music. The catch is that you will need to have a charge and sync cable with you to use that feature.

The TuneLink Auto can also be plugged into your cars aux input rather than using FM for sending the music out. The Bluetooth functionality supports more than one Android device at the same time and the FM transmitter is controlled by an app that is on the Android market right now. The kit will ship in mid-January for $99.99.
NEWS SOURCE:newpotatotech.com