All NewsBusiness, Financial & LegalCases, Cooling & PSUContests & GiveawaysCPU, APU & ChipsetsDealsDisplays & ProjectorsGamingMotherboardsScience, Space & RoboticsStorageVideo CardsVirtual & Augmented Reality
All ReviewsAll ArticlesAudio, Sound & SpeakersCases, Cooling & PSUCPUs, Chipsets & SoCsComputer SystemsDisplays & ProjectorsGamingMotherboardsNetworkingPeripheralsStorageVideo Cards
GuidesGamingAsk the ExpertsNewsletterAboutForums
RTX 4090Windows 11Halo InfiniteBattlefield 2042Elon MuskGTA 6RTX 3080HDMI 2.1
Computer Systems
Gateway has a large line of notebooks, desktops, and AIO computers. While the majority of the market for computers over the last few years has migrated towards notebooks and netbooks and away from desktop computers the AIO segment is still very popular. Gateway has announced the new ZX4951 and ZX6951 AIO desktops to cater to the needs of this popular segment and those looking for a desktop that takes up as little space as possible. 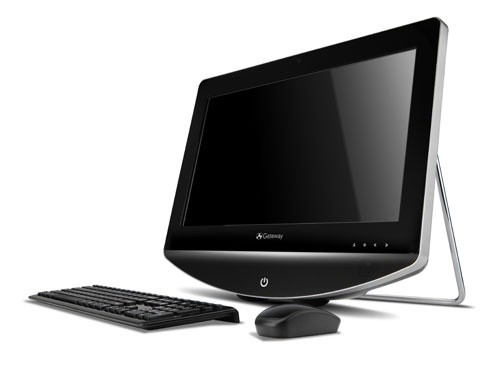 The two machines are very similar and share the same new design with a curved bottom edge and adjustable stands. The curved edge has lighting that can be adjusted for brightness that illuminates the included wireless keyboard and can be used for room mood lighting reckons Gateway. The ZX4951 uses a 21.5-inch screen, the ZX6951 has a 23-inch screen and both of the machines have HD resolution.

The CPU inside the new AIOs can be a range of parts including Pentium and Core i3 offerings. Gateway also crams Blu-ray drives into both machines and the ZX6951 comes with a TV tuner inside. The screen resolution on both AIOs supports full HD and the PCs ship with 4GB of RAM. The RAM can be expanded to 16GB and storage options include 500GB and 640GB HDDs. HD audio with 5.1-channel support is a common feature. Pricing for the machines ranges from $899.99 to $999.99 and both are available in the US right now.