All NewsBusiness, Financial & LegalCases, Cooling & PSUContests & GiveawaysCPU, APU & ChipsetsDealsDisplays & ProjectorsGamingMotherboardsScience, Space & RoboticsStorageVideo CardsVirtual & Augmented Reality
All ReviewsAll ArticlesAudio, Sound & SpeakersCases, Cooling & PSUCPUs, Chipsets & SoCsComputer SystemsDisplays & ProjectorsGamingMotherboardsNetworkingPeripheralsStorageVideo Cards
GuidesGamingAsk the ExpertsNewsletterAboutForums
RTX 4090Windows 11Halo InfiniteBattlefield 2042Elon MuskGTA 6RTX 3080HDMI 2.1
Motherboards
Yesterday we stopped by the ASRock headquarters in Taipei to check out a couple of their new goodies ahead of Computex next week and today we dropped into ECS who showed us a couple new motherboards that they will be showcasing at the big show next week.

First up we got a look at the ECS P55H-AK Black Series motherboard. It is a brand new board part of its P55 family that supports Intel Socket LGA-1156 processors with thanks to the Intel P55 Express chipset. The P55H-AK will be ECS' top gaming board with lots of bells and whistles to boost performance. It supports full speed SLI and Crossfire by way of the included NVIDIA NF200 chipset that provides additional PCI Express lanes. Adding to the gaming side, ECS also uses the Realtek ALC899 chip for what they call excellent audio and they have also worked with Creative to add in Sound Blaster X-Fi MB2 support.

Topping things off, ECS added not only one, but two NEC USB 3.0 controller providing four USB 3.0 ports - two on the back I/O panel and included is a cable that allows two USB 3.0 ports to be added to the front of your case or at the back of the case, depending on your preference. There is also not only one, but two SATA 6G controllers providing two onboard SATA 6G ports and two eSATA capable SATA 6G ports on the back I/O panel. Some of the other features and specs are listed in the image below. 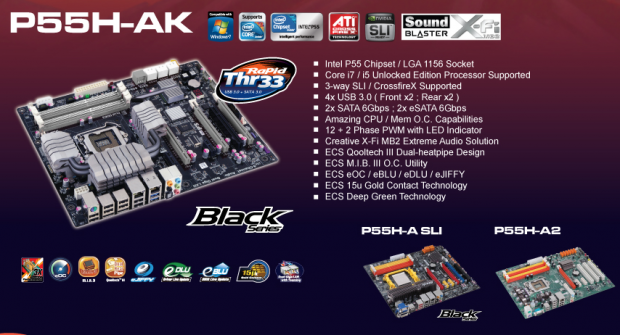 Watch the video we uploaded above to get a good close look. Have patience for the PM who was kind enough to introduce the mobo to us. It was her first time doing a video and English is not her first language, but still she did a good job.