However, while this in itself seems like it would only be fully harnessed by a niche crowd looking to go all out with gaming simulation setups or advanced (overkill?) levels of productivity, Power Color seems to think there are people out there who still feel it's not enough.

Take a look at this picture below :- 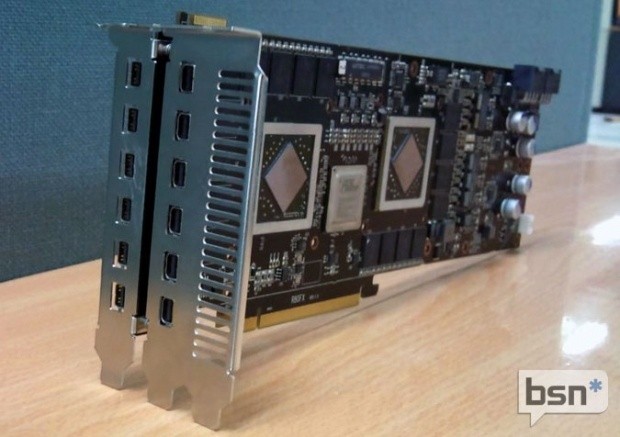 No doubt your eyes were quick to fixate on the I/O area. You'd be right in counting 12 mini-DisplayPorts, indicative of a unique "Eyefinity12" setup. As you can also see, the card is dual-GPU based, it's based on the ATI flagship offering, HD 5970 and carries 4GB of GDDR5 memory to help drive this massive array of monitors. The ability to run 12 outputs from this card comes thanks to each Cypress chip carrying six display pipelines; it could never have been accomplished from a lesser model.

As you can also see, the card will take up three PCIe slots, not surprising given how many ports needed to be packed in at the rear whilst allowing for heat exhaustion. The custom cooler Power Color will use for this monster is still in the works and it's been hinted the company plans to make it capable enough to handle significant out-of-the-box overclocks on the core and memory.

No word on availability or pricing just yet, but expect to see and hear a lot more about it come Computex in early June.
NEWS SOURCE:brightsideofnews.com
Newsletter Subscription