All NewsBusiness, Financial & LegalCases, Cooling & PSUContests & GiveawaysCPU, APU & ChipsetsDealsDisplays & ProjectorsGamingMotherboardsScience, Space & RoboticsStorageVideo CardsVirtual & Augmented Reality
All ReviewsAll ArticlesAudio, Sound & SpeakersCases, Cooling & PSUCPUs, Chipsets & SoCsComputer SystemsDisplays & ProjectorsGamingMotherboardsNetworkingPeripheralsRAMStorageVideo Cards
GuidesGamingAsk the ExpertsNewsletterAboutForums
RTX 3090 TiRTX 4090Diablo 2GTA 6Halo InfiniteElon MuskRTX 3080HDMI 2.1
Virtual & Augmented Reality
My DVR is one of the most important gadgets in my house. I use the thing daily, without it I would miss all the shows I really love, and even worse, I'd have to watch commercials again. TiVo has been granted a patent on technology commonly used in DVRs everywhere after filing the application way back in 1999. 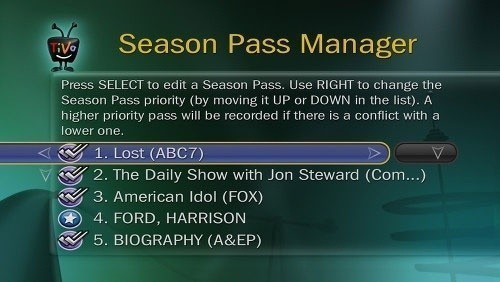 The patent covers TiVO's Season Pass technology and sounds harmless enough on the surface. Look into it too closely though and the horror of what this patent means becomes clear. The patent covers software that sits on the DVR and allows the DVR to resolve conflicts with other shows over the course of a season.

For instance on Thursday night if you have three shows you want to watch, the software in question will let the DVR record the two shows that are the highest priority to you. Without the software, the DVR would not know what to record and what to skip. This is a feature that every DVR out there has today. TiVo has no problems filing suits against anyone that infringes on its tech, which after this patent is everyone making DVRs. The question now is when the inevitable suits come, will your DVR provider cough up the licensing fee or simply remove the feature and castrate your DVR in the process.
NEWS SOURCE:davisfreeberg.com