All NewsBusiness, Financial & LegalCases, Cooling & PSUContests & GiveawaysCPU, APU & ChipsetsDealsDisplays & ProjectorsGamingMotherboardsScience, Space & RoboticsStorageVideo CardsVirtual & Augmented Reality
All ReviewsAll ArticlesAudio, Sound & SpeakersCases, Cooling & PSUCPUs, Chipsets & SoCsComputer SystemsDisplays & ProjectorsGamingMotherboardsNetworkingPeripheralsStorageVideo Cards
GuidesGamingAsk the ExpertsNewsletterAboutForums
RTX 4090Windows 11Halo InfiniteBattlefield 2042Elon MuskGTA 6RTX 3080HDMI 2.1
Gaming
I have often wanted to put a computer in the living room so I could play games on my big screen. I never did it because I don't want my massive gaming desktop sitting in the living room. A company called iGugu has unveiled a new device called Gamecore that can solve this problem. 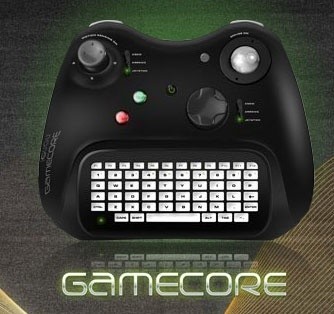 The Gamecore device consists of a wireless remote, a transmitter, and a receiver that can send the game to your TV from your PC. The transmitter and receiver have to be connected with network cable, which is an issue.

The main component of the system is the Gamecore wireless remote that features a trackball, joystick, QWERTY keyboard, and six accelerometers allowing the device to support motion control of games. Pricing and availability are unknown at this time.
NEWS SOURCE:igugu.com