Our fourth and final preview from the ASUS visit was a look at the upcoming Maximus III Extreme motherboard based on the Intel P55 Express chipset. 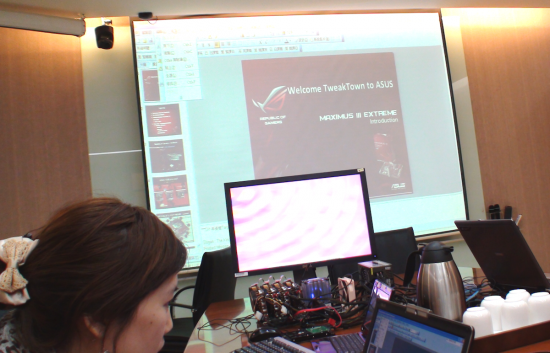 The exciting part of this preview was not so much the motherboard itself, but one of the key selling point features that it includes. You may or may not have heard about it, but ROG (Republic of Gamers) Connect is an interesting inclusion to the Extreme model that allows overclocking and BIOS adjustments on-the-fly from another system.

ROG Connect uses a special provided USB cable that runs from a specific ROG Connect USB port on the I/O panel of the motherboard and hooks up to another computer running Windows. ASUS, of course, had an Eee PC netbook running the ROG Connect "RC Tweak It" application and it operated just fine.

In the video we uploaded below, one of the product managers at ASUS started running 3DMark Vantage and then proceeded to mildly overclock the CPU via the Eee PC netbook. As you'll see, you can also do other things such as monitor real-time current and voltages.

Very interesting indeed. This is probably going to bring up an issue for Futuremark as far as I can see, as since ROG Connect overclocks on the fly and separate from the system running the benchmark, cheating could possibly occur. ASUS also intends to showcase its ROG Connect Bluetooth (RCB) at CES next month, which allows the same type of operation except on certain mobile phones over a Bluetooth connection.