The new mainboard featuring Ion and a possible Celeron 220 was spotted by the gang over at Fudzilla. We talked to Asus about the Ion when it was first announced and nVidia wanted to stuff it into netbooks. Although Asus declined to comment on Ion at the time, we had the feeling they were not discounting it altogether.

Traditionally Ion would be for Atom only but at Computex nVidia announced that the Ion would support additional CPUs as well as Ion. This is in line with nVidia CEO Jen-Hsun Huang's statement that the MCP79/GeForce 9400 is the same thing as Ion. 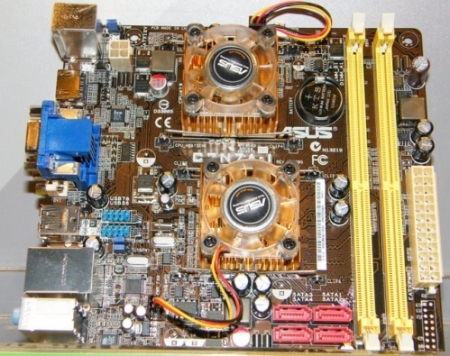 Asus has been showing off its ION-based C2N7A-I ITX motherboard, and we've come across some conflicting information. ION platforms have Atom CPUs, of course, and without them they're just plain MCP79 or Geforce 9400 chipsets, and it would seem unlikely that Asus would call its board ION if it wasn't one.

Unfortunately, the cooling solution suggests there's no Atom in this combination and we've heard that this board will actually run Celeron 220, which would automatically cancel out ION branding. However, this might be just plain speculation, as Nvidia wouldn't allow for ION branding on a non-Atom platform.