All NewsBusiness, Financial & LegalCases, Cooling & PSUContests & GiveawaysCPU, APU & ChipsetsDealsDisplays & ProjectorsGamingMotherboardsScience, Space & RoboticsStorageVideo CardsVirtual & Augmented Reality
All ReviewsAll ArticlesAudio, Sound & SpeakersCases, Cooling & PSUCPUs, Chipsets & SoCsComputer SystemsDisplays & ProjectorsGamingMotherboardsNetworkingPeripheralsStorageVideo Cards
GuidesGamingAsk the ExpertsNewsletterAboutForums
RTX 4090Windows 11Halo InfiniteBattlefield 2042Elon MuskGTA 6RTX 3080HDMI 2.1
Those that chose to get involved in the high definition format war of yesteryear knew that they were taking a gamble. In the end it was inevitible that either one format would win redering the other obsolete, exactly like the Betamax/VHS war of the late 1970's and early 1980's

For those that took the gamble with HD DVD and lost, it seems that Warner Bros is giving you just a little bit of hope. No, HD DVD isn't coming back out for another fight, but Warner has announced a new program to trade in your HD DVD's for a Blu-ray copy, for a small fee of course. 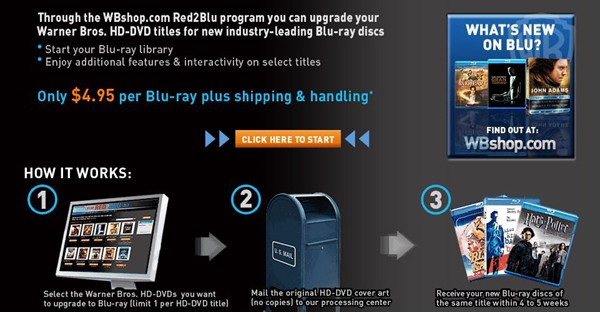 With Red2Blu, Warner offers you the chance to trade in virtually any of your HD DVD's for the same version in Blu-ray. They do have a limit of 25 that you can swap out, but it should cover most people wanting to upgrade.

Each title you want to exchange will cost $4.95 plus some shipping that is combined for your total order. Once your order is completed Warner will even give you a prepaid shipping label. All you have to do is send back the original cover art on the outside of the case; you get to keep the case and the HD DVD itself.

Warner says that it will take 4-5 weeks for you to get your new Blu-ray videos. The only downside is that the program is only available to those in the United States.