The Voyager Port is simply a docking station for your flash drive and has a button to allow for one touch backup with the bundled NovaBACKUP 10 software. This seems like a great option for those who are on the go all of the time and don't want to carry an external hard drive with them. 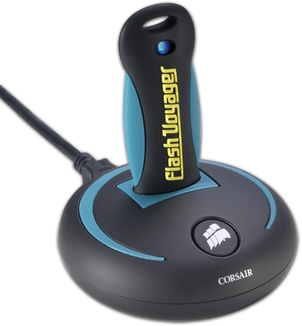 Corsair obviously wants you to use it with their Flash Voyager drive, but any USB drive should work do long as you have enough space on it to hold your files. According to some research done by Corsair, 80% of users have less than 64GB of data in their My Documents folder so the reckon that a 32GB of 64GB flash drive should the trick while still leaving you room for other items such as music.

"Your most important personal data, such as documents, spreadsheets, PDFs and presentations generally only occupies a few gigabytes of hard disk space, meaning that huge hard disk-based backup drives are largely wasted," continued Carlton. "Our research indicated that over 80% of users have a 'My Documents' folder of less than 64GB, and more than 85% need to regularly transport less than 64GB of data between different PCs. This shows that USB flash drives are an efficient method of backing up your data, and with high-capacity USB flash drives, there's still plenty of room for your favourite music, photos and even movies."