All NewsBusiness, Financial & LegalCases, Cooling & PSUContests & GiveawaysCPU, APU & ChipsetsDealsDisplays & ProjectorsGamingMotherboardsScience, Space & RoboticsStorageVideo CardsVirtual & Augmented Reality
All ReviewsAll ArticlesAudio, Sound & SpeakersCases, Cooling & PSUCPUs, Chipsets & SoCsComputer SystemsDisplays & ProjectorsGamingMotherboardsNetworkingPeripheralsStorageVideo Cards
GuidesGamingAsk the ExpertsNewsletterAboutForums
Halo InfiniteBattlefield 6Elon MuskGTA 6RTX 3080RTX 3070HDMI 2.1Bitcoin Mining
Security firm Kaspersky had its US website subjected to a SQL injection attack recently. The attack, which used SELECT statements to force the SQL backend to cough up a listing of tables, was announced on the 6th by the person claiming responsibility for the attack. Kaspersky did not respond until 24 hours later with a small statement claiming that the attack was halted in 30 minutes and no data was affected.

The story would end here if it were not for the fact that the attack actually took place several days earlier according to an Admin at Hackerblog.com. The hacker who discovered the vulnerability only went public after receiving no response from Kaspersky.

As for the claim that no data was exposed that is also not true as a full list of the tables in the data base are listed over at hackerblog.com. The hackers responsible for finding the vulnerability stated they did not download any user data as this was not the intention of the exercise and only wanted to point out the issue to Kaspersky. 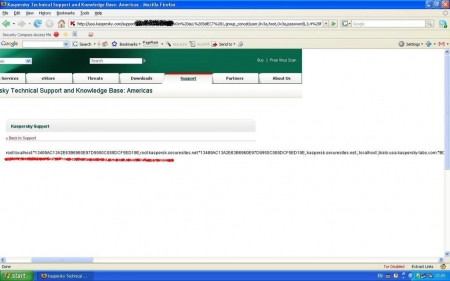 Kaspersky is one of the leading companies in the security and antivirus market. It seems as though they are not able to secure their own data bases.

Seems incredible but unfortunately, its true.

Alter one of the parameters and you have access to EVERYTHING: users, activation codes, lists of bugs, admins, shop, etc.

First, lets see the version, user and name of the database.