A quick scan of Intel's website shows the new CPU as launched but with no pricing established. According to Techconnect Magazine this could be Intel waiting on price cuts that are sure to happen over AMD's upcoming launch of Dual and Tri-Core Phenom IIs. 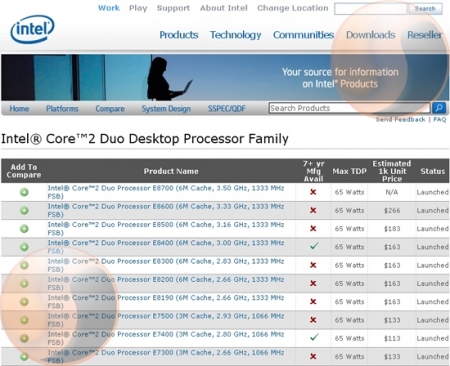 Intel seems to be preparing a little something for the dual-core front, the release of a 3.5 GHz Core 2 Duo processor. Half-brother to the Xeon X5270, the 45nm-built E8700 has just slipped onto Intel's website and it features, in addition to the 3.5 GHz stock frequency, a FSB of 1333 MHz, 6MB of L2 cache and a TDP of 65W.

The Core 2 Duo E8700 has no price tag yet (although it is labeled as 'launched') but that might be explained by two things - one, it hasn't been announced, and two, Intel wants to introduce it after a new round of price cuts that will likely see the 3.33 GHz E8600 dip to $183 and the rest of the dual-core line-up become more price-aggressive and able to fight AMD's upcoming Phenom II dual- and triple-core CPUs. The ball is still in Intel's court...