Well Call of Duty has reached that level of popularity. According to a post over at Fourzerotwo.com by one of the Developers there is an e-mail claiming to be an invite to a new BETA. But there is no BETA; in fact there has not even been an announcement about the next game in the series.

So if you get an e-mail like the one below, just delete it. 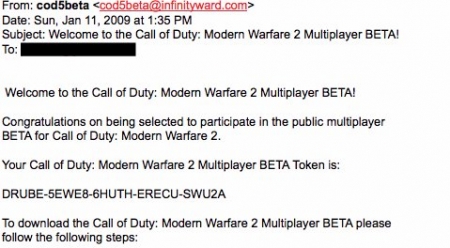 If you receive one, just delete it. Don't open it, reply, or click any links - it's fake and could contain a virus or be an attempt to phish personal information. The body of the email is an exact replica of the one I sent out during the COD4 Beta, except they've replaced all references of Call of Duty 4.

For the record, there is no beta. Believe me, if we were having a beta, I'd be screaming it from every internet rooftop from Twitter to Forums. We have yet to even officially announce our next project, let alone a beta for it. Although, it is kind of flattering to think Spammers think a beta for our next game is luring enough to get people to open. WATCH OUT Penis Enlargement spam mail, there's a new kid on the block!