He has a very interesting read on the direction computer and peripheral companies are headed. He penned this as a sort of response to a Blog entry by Rahul Sood from Voodoo HP. Sood declaims (in his blog entry) that the high-end PC is dead while pitching Voodo's upcoming Blackbird 003 which is a small and neat little device. 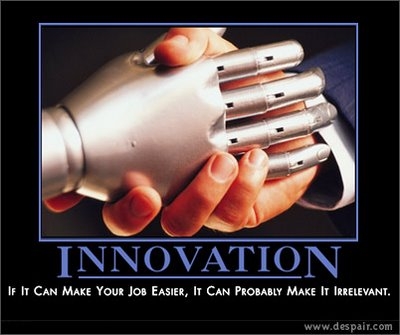 Last night, I was preparing myself for departure into the world of dreams for couple of hours, when I got the nod that good friend Rahul Sood of Voodoo HP fame posted something interesting on his blog. I ventured to his site and read a good written article that delivers a fine and solid message. Wrong one, I am afraid.

Based on his article, which speaks about the death of high-end PC computers (neatly, some years after Rahul sold his own boutique PC manufacturer to HP for a large sum of dead presidents), the world is going to evolve into small and neat things. And that is a nice pitch to launch a product like the upcoming Blackbird 003, as insinuated in a follow-up post.

And this is where it hit me. The perception of human species is that we're an exclusive kind. One cannot co-exist with another, starting in kindergartens, throughout school, rivalry between brothers/sisters in a family or nations - does not matter, we all think of ourselves as God/Allah/Manitou-given right to exterminate the opponent because "we're better". However, when we look at the world in general, we see that everything is inclusive, even our position in the food chain. We cannot be different, because we would belong to a different position in the food chain, not on top of it. We are predators (Orca the killer whale is also a mammal, so don't pull that argument that we're cute as dolphins), we take all the best qualities, them being good or bad, and use them for our own interests. However, we do not cancel each other out. It is the competition that drives us to the best or worst of our potentials, and it does not matter who comes second, it is the matter of who makes the best product, that being your performance in a family, or a company.