These bonus missions extend Far Cry 2's game play by a whole 3 gripping hours. They bristle with extraordinarily coolness, and make the most of Far Cry 2's signature graphical excellence and real-world physics modelling. Intel collaborated with developers Ubisoft Montreal, to ensure that both missions bring out the best in Far Cry 2's unique hyper-real depiction of war-ravaged Africa. Make no mistake: this is the stuff your Intel Core2 Extreme was made for.

This mission sends you into the most heavily guarded region of the Leboa-Sako territory. Hiding out at the old Legion fort is a Moroccan who might be able to help you locate the Jackal. Your objective is to locate him and find out what he knows.

Your predecessor has tracked down the American informant to the Dogon village in the rocky northern ranges. Your objective: follow his trail and find out what the informant told him. 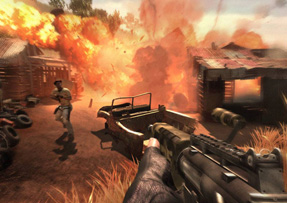 In order to access the new missions you need to run Intel's exclusive Game On program (link provided at the bottom of this page) which will then unlock the first of the two new missions. Once you've completed Mission 1: The Morrocan, you'll be able to proceed onto the second mission: The American.