It seems that President-Elect Barack "Gotta Have My Blackberry" Obama was seen in a gym using a Microsoft Zune player. The reporter (*Cough*) who saw this posted it up in blog and was pounced upon by the Mac fans out there.

One of my favorite comments was:

"Obama is a confirmed Mac user, and it isn't too much of a stretch to believe he uses OS X as his primary OS, considering there have been articles on his implementation of iChat in his campaign. As far as I know the Zune is not Mac compatible, and even if he was dual booting it wouldn't make much since for him to load Windows every time he wanted to sync with his music library."

Does it really matter what MP3 player he uses or what OS? 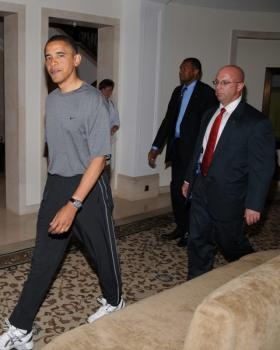 It wouldn't be long before I could ask the man myself, as he walked majestically across the gym floor in his track pants and sweat shirt. I did a double take, and soon after that, looked around the gym to see if anyone else knew he was here. Nobody seemed to notice.

But he hopped on the machine next to me and broke a mean sweat while reading a copy of USA Today and listening to his Zune.