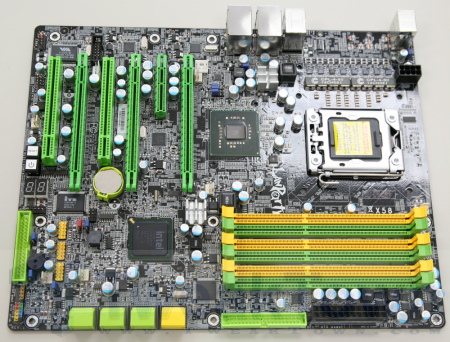 We got a look at the first revision of the board and sadly the new heatpipe cooler was not quite ready for us to take photos of. This board will get a similar made by Thermalright cooler as seen on older boards, but this time around DFI has decided to make the coolers themselves to try and reduce costs. It was mentioned that while the cooler will be similar, it will be improved by allowing users to use their own after market or custom cooling equipment or "weapons" as Jarry put it, whereas with other brand motherboards that is not always that easy to do. That did allow us to get an unobstructed view of the no fuss high-end enthusiast performance motherboard. Jarry Chang, the head engineer and designer at DFI, had some interesting points to make about the LANPARTY UT X58 and much of it made perfect sense. 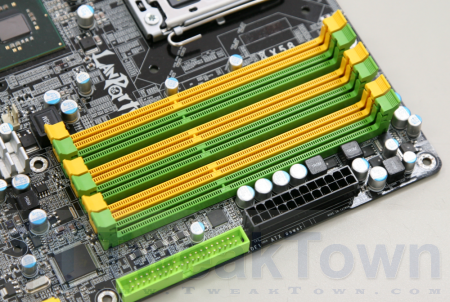 The first question of course had to be about the DDR3 voltage limitations on the X58 Express chipset with Core i7, which came to light online recently. DFI told us that they were not aware of any serious issues and that they've tested memory working around 1.8 - 1.9 volts without killing a CPU. DFI has no intention of limiting the amount of voltage to go to the memory on the LANPARTY UT X58 and stated that they will probably support up to 2.0 - 2.1 volts and are considering providing a warning to users depending on how further testing goes up until when the board goes on sale in November.

He mentioned that other motherboard brands often pack a lot of fancy features onto their high-end boards, but he noted that most of them were over the top and not used or not required. For instance, this X58 motherboard gets eight CPU power phases whereas some other brand boards have up to 12 phases and even more. Jarry noted from his own internal testing that no CPU, even quad-core, would need this many and the rest would just go wasted and unused.

DFI is purely focused on creating high-end performance and super overclocking motherboards without the extras that other brands include - as mentioned, you don't get the so called "GPS" and "airbags" with DFI boards, but you do get great performance - and we would agree with that statement. We all had a laugh when it was mentioned by DFI that folks like GIGABYTE and ASUS are creating boards with loads of power saving features but pack on a lot of unnecessary parts and materials that are not really needed and go against the whole notion of saving the planet. 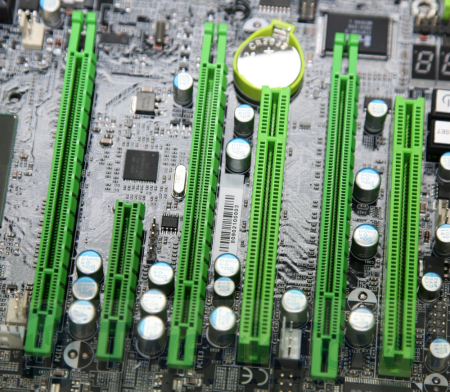 Getting back to the motherboard itself, the LANPARTY UT X58 will support ATI CrossfireX and NVIDIA SLI. Jarry mentioned that the board we saw today was not the final shipping version (but very close) and the final version would be the same, but will have its three PCI-E 2.0 expansion slots running electronically at x16, x8 and x8 lanes. NVIDIA suggested rather persistently to DFI over a couple of meetings that this was the best setup for optimal performance and a requirement of three-way SLI. The board will get two PCI slots of legacy devices along with a single x4 PCI-E slot. 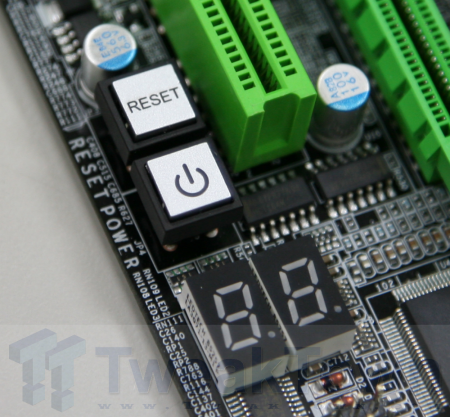 As far as power phases go, the Socket LGA-1366 CPU gets eight phases, two phases for the triple-channel DDR3 memory, two for the Northbridge and also two for the PWM. IDE is not forgotten with a single IDE port that supports two devices along with an FDD port, which could probably go now.

There are eight SATA-II ports but sadly no eSATA at the moment. Jarry mentioned that he was not happy with placing eSATA ports on the back of the board on the I/O panel, since it's not really "true" eSATA, because the user has to go to the back of the case and that's a hassle. Instead, DFI is working on a device, like a break-out box, which allows users to run a 10m cable from the back of the motherboard to a box, which could be placed on your desk for better ease of use - this is a great idea and we look forward to seeing it. 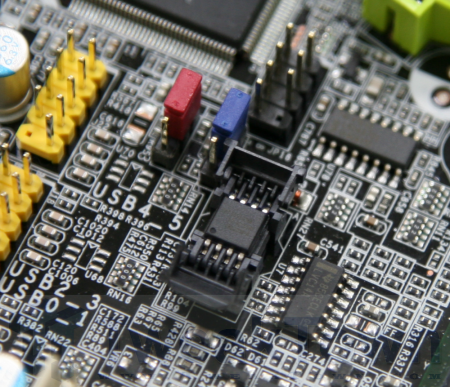 While it's not a new feature, it was the first we really took a lot of notice of it. We are talking about DFI's BIOS chip, which is setup to easily be able to be removed and replaced with a new one if it goes bad during overclocking. It also allows Jarry and other DFI engineers to send its BETA testers and overclockers new BIOS' to test out and see which works best. There is also a programmable pin header just above the BIOS area next to the blue jumper that allows power users to manually program the BIOS. You get a look at that part of the motherboard above.

As far as availability goes, the board should go on sale no later than the end of November after the launch of the first three Intel Core i7 processors and while the price hasn't been fully decided yet, it should go on sale for "at least" $300 USD - start saving your pennies, as no X58 motherboard is going to be cheap.