All NewsBusiness, Financial & LegalCases, Cooling & PSUContests & GiveawaysCPU, APU & ChipsetsDealsDisplays & ProjectorsGamingMotherboardsScience, Space & RoboticsStorageVideo Cards & GPUsVirtual & Augmented Reality
All ReviewsAll ArticlesAudio, Sound & SpeakersCases, Cooling & PSUCPUs, Chipsets & SoCsComputer SystemsDisplays & ProjectorsGamingMotherboardsNetworkingPeripheralsRAMStorageVideo Cards & GPUs
GuidesGamingAsk the ExpertsNewsletterAboutForums
AMD Zen 4Intel ArcBattlefield 2042RTX 3090 TiRTX 4090RTX 4080GTA 6Elon MuskHDMI 2.1
Sony has been super busy with its Cyber-shot range of small digital camera over the past year or so. It seems like only yesterday that I picked up the DSC-T200, but that was soon replaced by the T300 and now today Sony has taken the covers off its Cyber-shot DSC-T500 model. 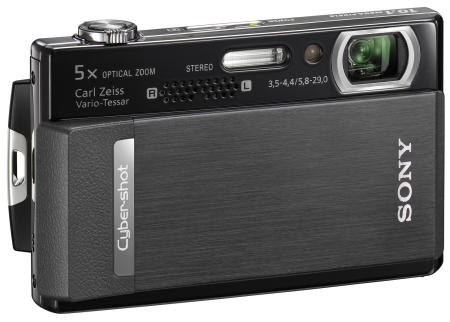 The T500 carries a similar look and feel as the T200 and T300 with some slight visual changes on the outside but inside is where the big changes occur. It now is able to take photos at a massive 10.1 megapixels and probably the biggest selling point of this camera is that it can shoot 720p video at 30 frames per second for up to 10 minutes per video. You can record hours of video using a Memory Stick media card which are now sold separately up to 16GB in size.

The codec used for recording is Sony's own (der... of course!) MPEG4 AVC/H.264 and naturally Sony reckon it's the best choice since it has the benefits including high-quality video as well as small file sizes that are easy to download, upload and share.

So will I upgrade my Sony T200 to the T500? That's a tough question as in a month or two, Sony might turn around and release the T700 or whatever they will call the next model - so I might wait a bit longer yet.

There is plenty more information over at the press release which we uploaded here.