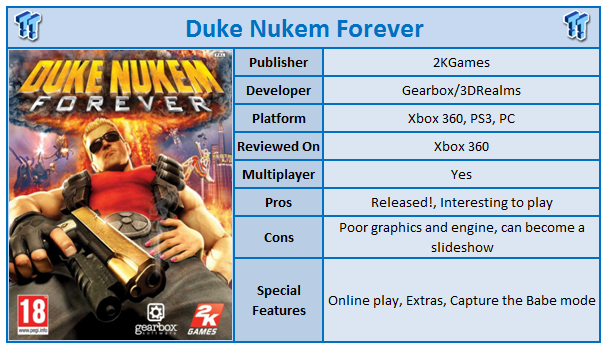 There was a time in my game writing career that I thought I would never get the chance to play, let alone review, Duke Nukem Forever. When 3D Realms announced this game during the 1998 E3 Expo little did they know the saga that it would become. Frequently the number one on Wireds vapourware list, it had come to be well accepted the game would never see the light of day. However, thanks to Gearbox, that is not the case and it is here and whilst the game disappoints in many ways, in others it does not. If anything, it is a great history lesson in how far gaming has come in the last decade, but in such a changed world of gaming is Duke Nukem still relevant in 2011 despite the macho, arrogant, chauvinistic traits of the character?

Duke Nukem Forever picks up sometime after the events of Duke Nukem 3D. Duke has spent the last decade or so proving to the world how great he is by going into space, becoming an MMA champion and building a Casino. The aliens return to earth again and the president warns Duke away from attacking them. However, they are back to avenge their defeat to Duke Nukem in the previous game and this time they are taking the women as hostages. There is something so Duke Nukem about a military commander worrying about the fact they are taking the woman more so than the threat to the president of the United States. 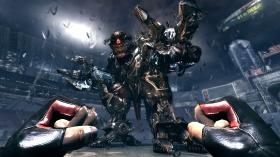 As you would expect, Duke Nukem Forever is a first person shooter and the true sequel to the popular Duke Nukem 3D, and there is many elements we typically don't see in the popular shooters of today. Back in the day 3DRealms promised physics puzzles and 'Forever delivers this in spades. Every so often you will run into a puzzle which uses both environmental elements and the physics engine. These puzzles make you lose your head, but are not difficult enough to keep you stuck for hours on end. They are something which breaks up the monotonous gameplay of shooting aliens.

As well as the physics puzzles, the game also contains platforming elements and this is where another difference in comparison to the shooters of today appear. Rather than progressing you through a corridor, always showing you where to go, the game will often lead to set pieces where you will be stuck in a room with enemies just coming in droves and until you defeat a bunch of them the door won't open.

There is also numerous boss fights which have become part and parcel of the Duke Nukem series, but those who have only played recent shooters would not be accustomed to. There are elements which are taken from recent shooters such as only being able to carry two weapons, but this doesn't fit the Duke Nukem universe at all and having to choose which guns to carry just seems a pain in the butt rather than improving the gameplay.

The character of Duke Nukem also brings a lot to the game. In many ways Duke Nukem Forever is one big parody of the recent big shooters such as Halo and Call of Duty (which is ironic considering there is a game which is a parody of Duke Nukem). Duke busts out the one liners and many will make you laugh. For example, the load screen reminds you that 'if you get stuck, just check out the FAQs online'. There are also many references to recent shooters, but to go into detail would spoil some of the more hilarious moments in the game. What we can say is that 3D Realms and Gearbox have captured the Duke Nukem character perfectly.

However, this is unfortunately where the good side of the game ends. Many will argue it is unfair to compare Duke Nukem Forever to 2011 games, however, we disagree. The game has been released at full price and in 2011, so the comparisons must be made. The engine and graphics present in the game are in a word, disappointing. Many years ago they would have been impressive, but gaming has moved on so much. It's almost hard to believe that Duke Nukem Forever uses the Unreal Engine, especially when you put it side by side with something such as Gears of War. Also, Duke Nukem Forever returns to the days where unreal engine pop-in was common. Often when you load a level the textures will be bland and blank for a few seconds.

Also in quite a surprise, the frame rate can at times become a slide show. Given this game was announced before the Xbox even existed and was originally going to release on the Xbox 1, we can't believe how bad the game runs sometimes. Load times also leave a lot to be desired and each time Duke dies, you have to endure it again. Often in some areas of the game this can happen numerous times and it takes about thirty seconds or so to reload the level.

The problems don't end there. The AI is pretty much non-existent with enemies charging towards you without a care in the world and whilst in a group this does make the game difficult, there is no smarts in the enemy characters.


You also sometimes hit a 'brick wall' in the story where the game will just throw so many enemies towards you, it will take multiple times and different strategies to defeat them.

Also, in some of their experimentation, 3DRealms has created more problems for the game. We won't go into details, but there is one specific point in the game where you will want to throw your controller through the TV. As well as this, the control system does not feel good off the bat. Gearbox/3DRealms give you options to change the sensitivity, but overall the controls are disappointing. It's hard to control the aim of the gun and it doesn't feel smooth at all. After an hour or so it will be second nature, but it really does stick out during the first moments of playing the game.

However, perhaps the biggest disappointment comes with the way the story progresses. Whilst there are over twenty missions in the campaign, it really only takes place in two major environments and there is no doubt that the best of the game comes within the first half. Towards the end of the ten or so hours it will take you to complete the game first time around, it will feel like you are grinding away just to see the end rather than enjoying the game. The lack of variety in mission setting is a real disappointment, given what 3DRealms had displayed in some of the early trailers, but also given how long the game took to release. 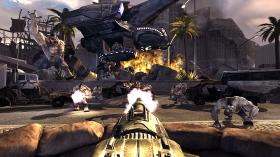 The puzzling thing about Duke Nukem Forever, however, is that it is still somewhat compelling to play. Whether that is a case of wanting to see just how this game has completely turned out after twelve years, find out where Duke goes next, or the game is actually interesting to play, is up for debate. What we can say is that we found it very hard to pull ourselves away from the game once we started and in many points of the game it is actually very enjoyable to play. It's just overall that it feels hobbled together rather than a polished experience.

The biggest problem we found many times in the game is that the developers stumbled onto something interesting and fun to do, but then took it to the extreme. One such example is driving the truck through many desert levels every so often having to fill up with gas which you find hidden in towns. For the first two times it felt quite different and interesting to play, but past that it felt like the developer knew they were on a good thing and just wanted to keep making the player do it.

The game also contains a multiplayer component and this is where one of the more controversial aspects of the title is found. One of the game modes, capture the babe, is a Duke take on the traditional capture the flag system. However, instead of capturing a flag, you have to take the other team's girl and as you run with her, she will struggle. To calm her down you press a button to slap her on the arse, and you have to do this to reach your base and score a point. It's a mode that feels like it should have been left in the dark ages rather than 2011. Other modes are fairly common including deathmatch. The game ran fine on Xbox Live. However, we can't help but feel the animation felt stilted and it was hard to hit the other players, even with a solid network connection.

The fact this game has come out is somewhat amazing. Twelve years later, it's here and it's not without its good points, but overall the wait has not been worth it. Duke Nukem fans will like it, but will also identify the issues and anyone new to the series may actually wonder what all the hype was about. Gearbox does need congratulations for not trying to rework 3DRealms work and what Duke Nukem does do is show us how far gaming has come in a short time and is an excellent history lesson. The fact is you simply must play this to prove to yourself this game has actually released and is playable, but do that via a rental instead of a purchase.