MyDigitalSSD is a small company based in upstate New York, but most SSD manufacturers claim the company resides as a thorn in their ass. 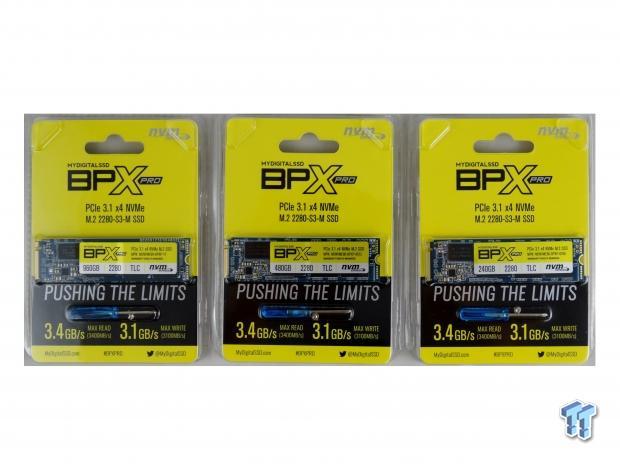 MyDigtialSSD isn't accountable to shareholders that demand high-profit margins. The company's earnings calls are direct emails from the founder to those with previous purchases to announce sales, special buys, and presale openings. There isn't a massive marketing budget by design; it keeps prices low. Because of that, many sites don't even review the company's products.

When the BPX Pro announcement hit the newswire, the company opened up pre-orders for early adopters. Since the announcement, SSD and flash prices shrank. Instead of taking the money and running, MyDigitalSSD released new pricing details and refunded every preorder buyer. This behavior gives MyDigitalSSD a faithful following.

Before we dive into the new BPX Pro we first have to talk about its predecessor to fully appreciate the series. The MyDigitalSSD BPX came to market during the longest flash shortage we've ever had. The drive shipped with Phison's first NVMe controller, the PS5007-E7 and MLC flash. Phison's founder and CEO forecast the flash shortage; he was one of the first to talk about it publicly. Before he let the cat out of the bag, he stockpiled massive amounts of 2-bit per cell MLC flash in anticipation of the shortage, and before the fabs turned nearly all production over to slower 3-bit per cell TLC.

The MyDigtialSSD BPX was the last consumer SSD not from Samsung's Pro series to utilize MLC flash. It was also one of the first low-cost NVMe SSD at a time when nearly every other product in the category cost significantly more.

Other companies, like Corsair, Patriot, and Zotac released SSDs with the same controller and flash but they don't have the extremely low overhead of MyDigitalSSD. The competition couldn't remove the thorn. The BPX built a strong market position that lasted until the MLC ran out.

The new MyDigitalSSD BPX Pro looks to build on the success of the previous generation. The company already set aggressive pricing that takes a sword to the HP EX920 pricing but only slices a few dollars off the Adata SX8200. The market has changed quite a bit since the original BPX. SSD prices have dropped nearly 50% in the last year. Today we'll see if the current conditions allow the BPX Pro to stick it to the competition.

MyDigtialSSD measures claimed performance with CrystalDiskMark, so the random numbers come in the form of throughput. In our testing, we measured around 13,000 IOPS at queue depth 1 and for most desktop workloads, that's the number you care about.

Even though the BPX Pro is the first product with the new Phison PS5012-E12 (E12 from this point forward in the review), we've shown performance previously in tradeshow coverage and preview articles that detail the architecture and hardware specific features. 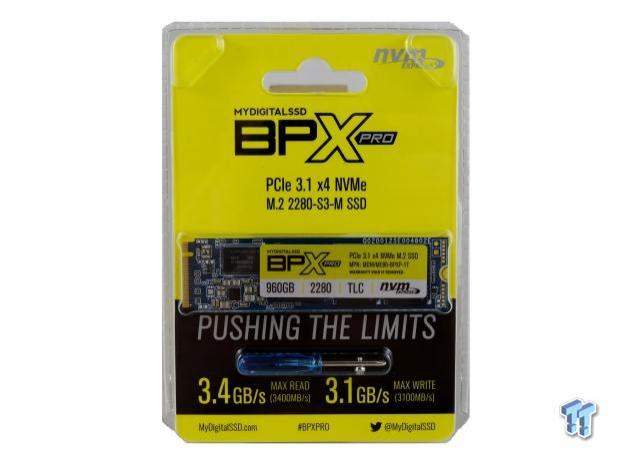 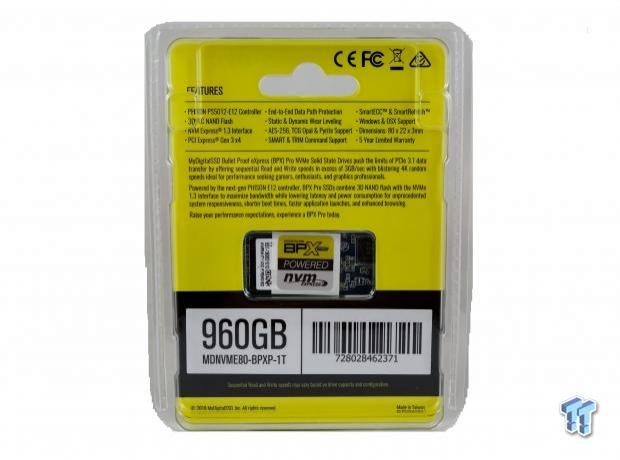 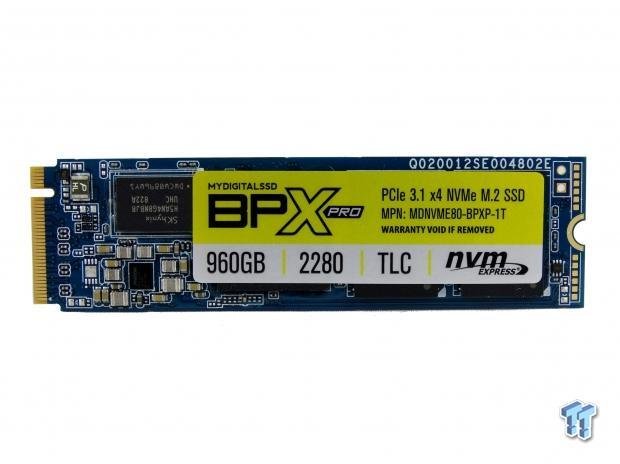 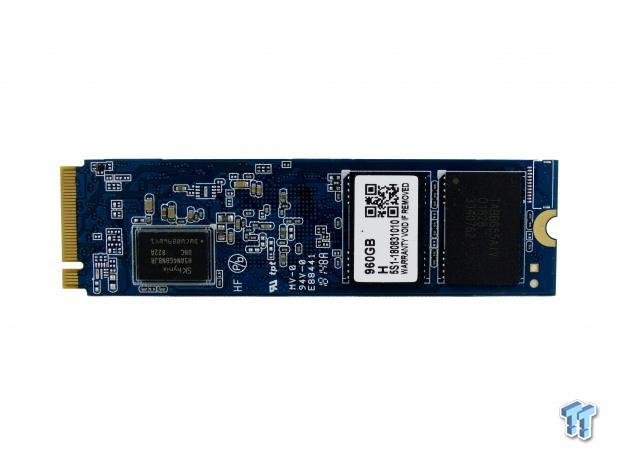 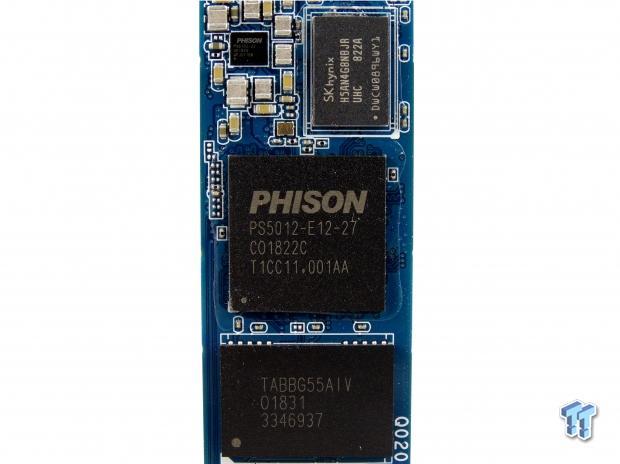 To keep prices low and offer shoppers a strong value, MyDigitalSSD uses a blister pack instead of a box, foam holder, paperwork and so on. The blister pack allows the company to give you a small screwdriver and a fine threaded screw most often used to secure M.2 SSDs. For the first time that we know of, MyDigitalSSD also offers users a case sticker so you can show your fandom for the BPX Pro SSD.

The drive itself is a 2280 design, 22mm wide and 80mm long. The 240GB and 480GB fit all of the components on one side, and the 1TB and 2TB are double-sided. This only matters in two older notebooks that we know of. Those systems had chips under a short riser M.2 slot, and you couldn't install double sided SSDs. The Lenovo Carbon X1 Gen 1 was one of them (we have one in the lab), and Dell released around the same time had the same issue. Companies have learned not to put additional surface mount components under a slim riser, and we haven't ran into the issue in at least four years. 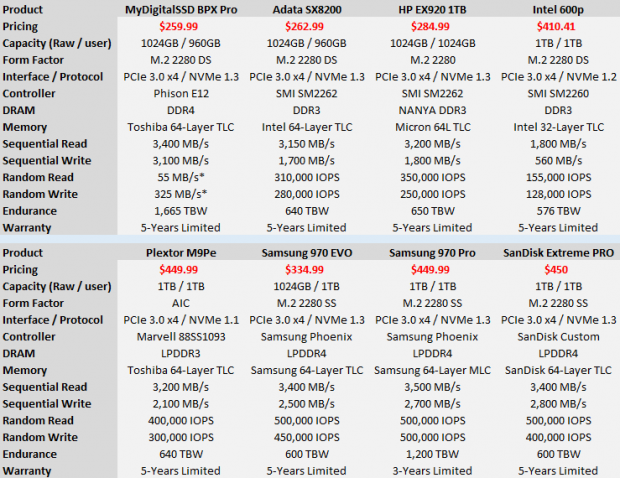 We pulled in seven popular NVMe SSD to compare to the new 1TB class BPX Pro. Every drive in this section is available on the market other than the Intel 600p, a popular and early to market low-cost NVMe drive that many of our readers own. The 600p is still available on Amazon but at an inflated price. 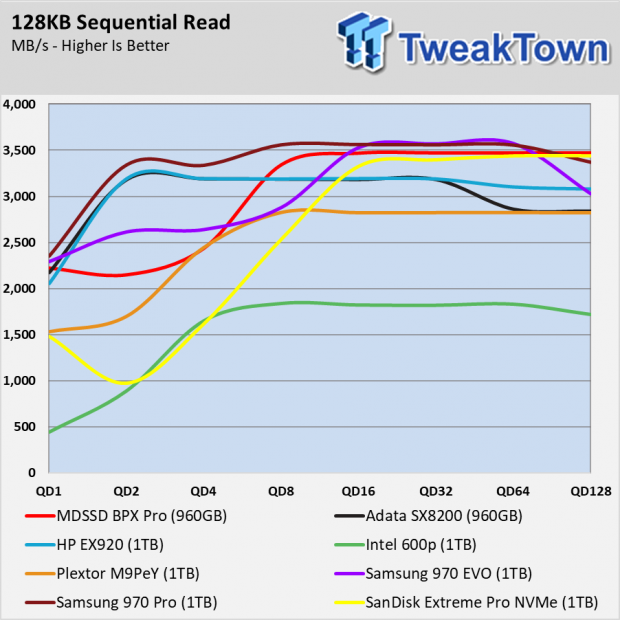 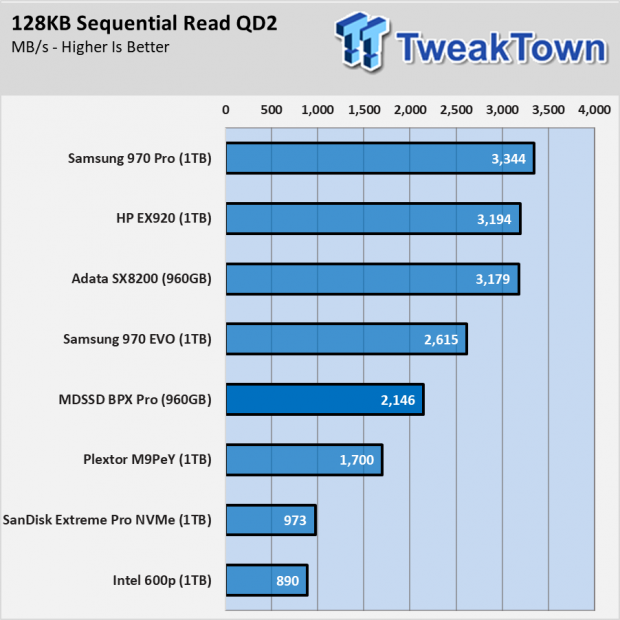 With the mass production firmware in place, we hoped our queue depth 2 and 4 dip would subside in the sequential read test. It hasn't, but other tests will show sequential read performance is strong with this one. 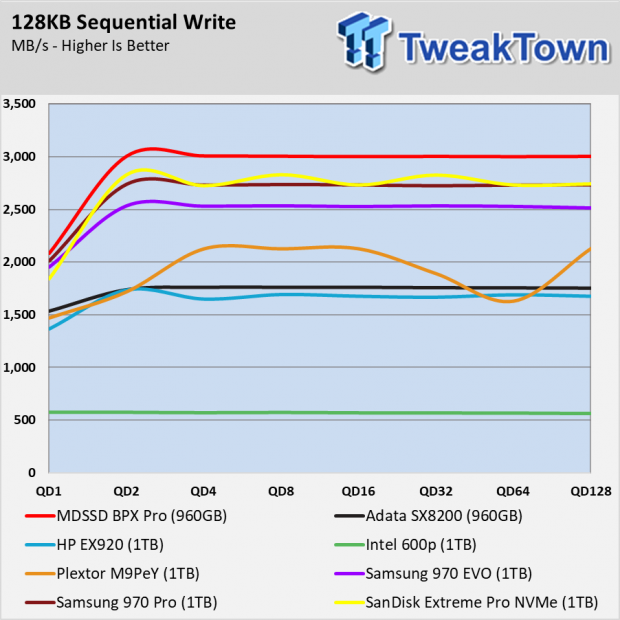 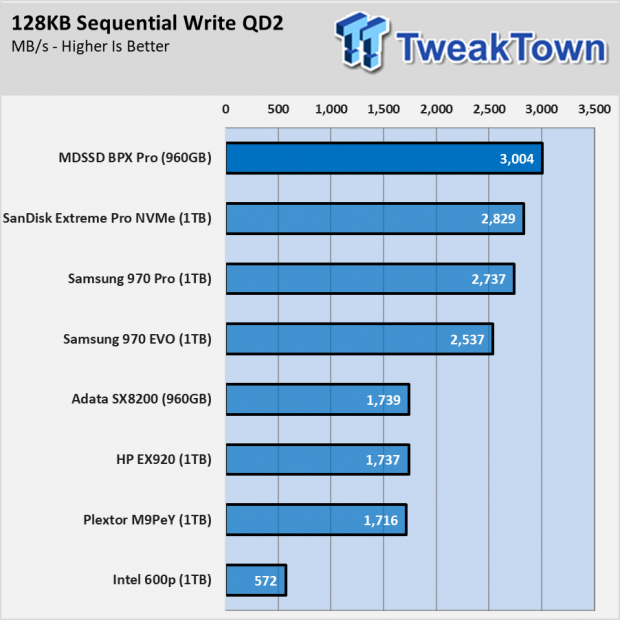 The sequential writes are nearly off the chart. We recorded very strong results across the queue depth range including QD1 where the BPX Pro even outperformed the Samsung 970 Pro in SLC cached writes. 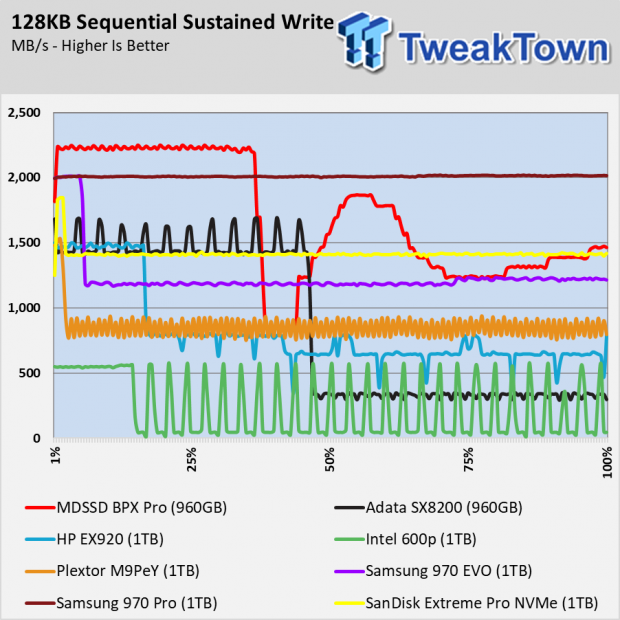 Phison has increased the SLC write buffer performance on the 1TB BPX Pro. The buffer is now dynamic but still gives users a lot of space to transfer large media files before the performance drops 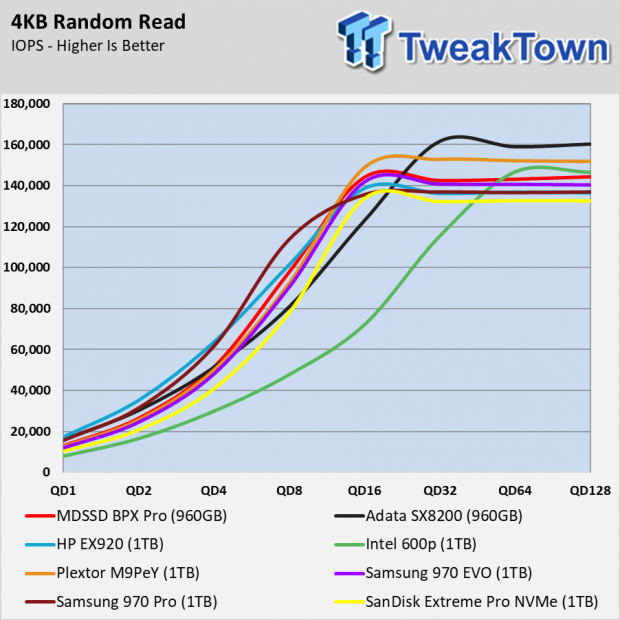 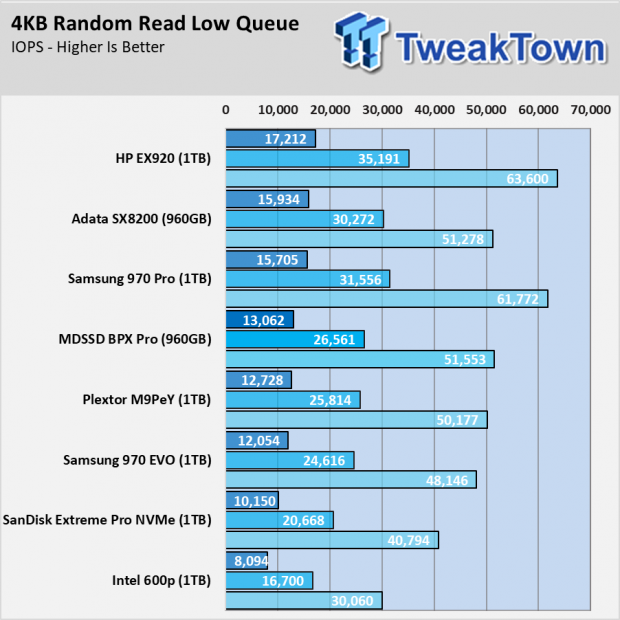 The random read test at low queue depths feels like the big reveal. The BPX Pro manages to push past 13,000 IOPS at QD1 and scaled really well as we increase the queue depth. It doesn't reach the same high rates as the Silicon Motion, Inc. SM2262 drives.

The BPX Pro uses Toshiba's 400 MT/s flash, and the SMI drives use Micron's flash with a 667 MT/s bus speed. Toshiba's next-generation memory, BiCS4, operates up to 800 MT/s but the memory is not widely available. BiCS4 give MyDigitalSSD an update path but it's a bit early to start talking about BPX Pro 2. 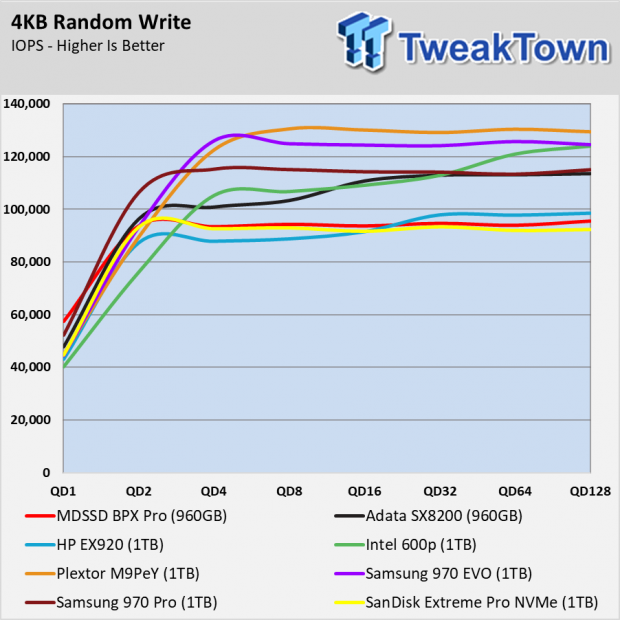 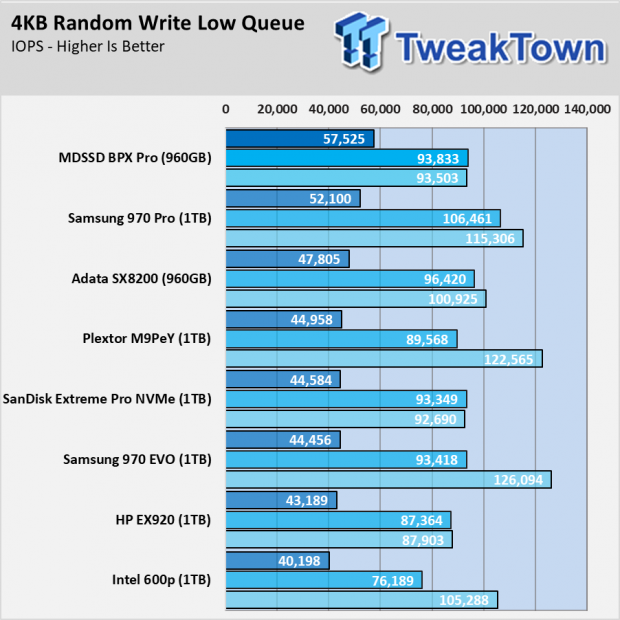 The BPX Pro has the data writes down pat. At QD1 the 960GB drive blazes past the other drives thanks to the new SLC algorithms and data management. 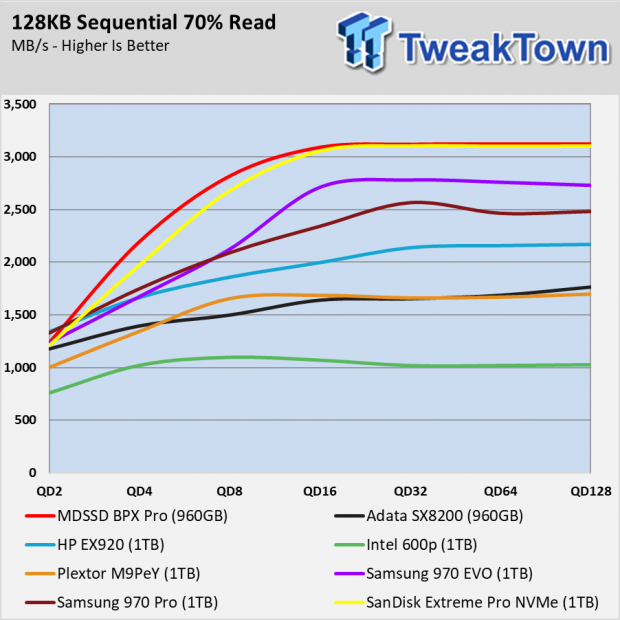 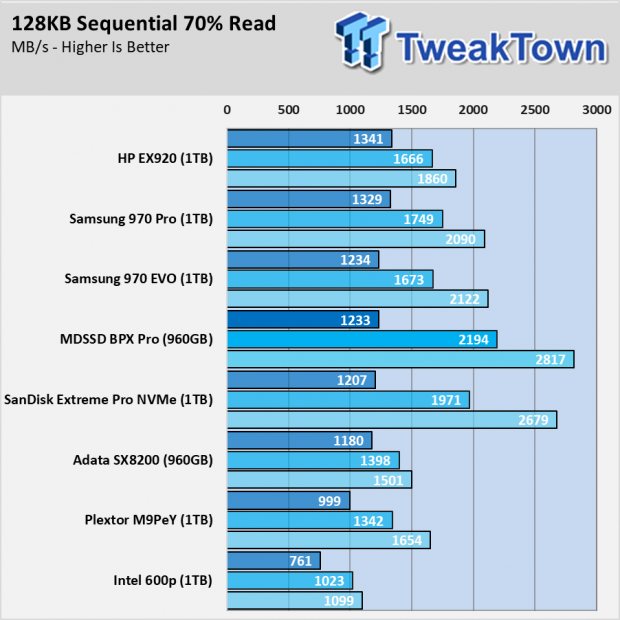 The bar chart is a bit misleading since it weighs the lowest queue depth. The 960 GB BPX Pro starts out a little lower than the others but quickly ramps up the sequential mixed workload. The drive's QD4 mixed workload performance is crushing to most of the other drives and it only scales higher at QD8 where it stands alone with nearly 3,000 MB/s. 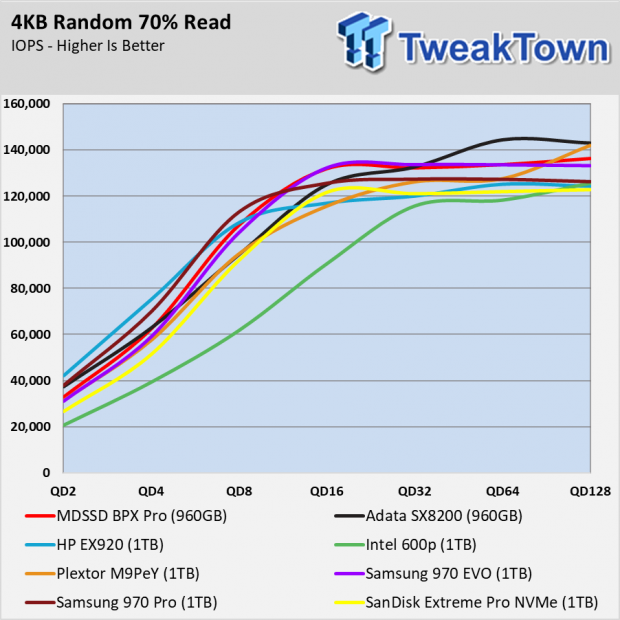 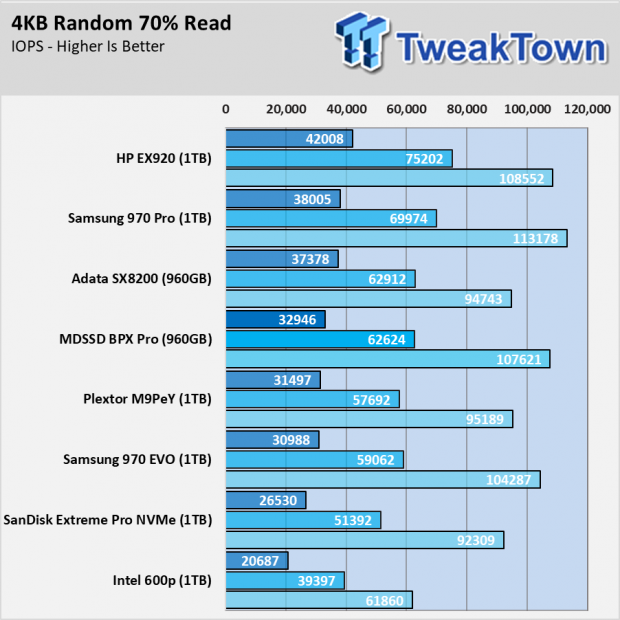 The random mixed workload performance is a bit more restrained. The 960 GB BPX Pro is strong with nearly 33,000 IOPS at QD2 and ramping up quickly as we increase the workload. 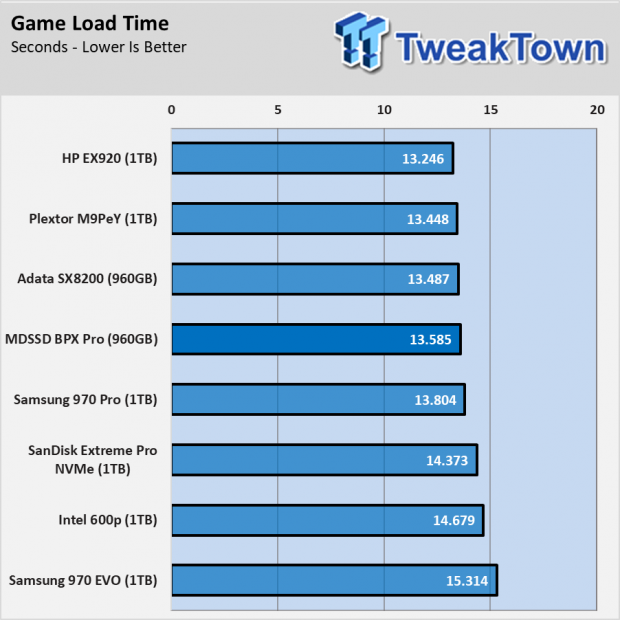 Moving our focus to real-world applications, we start with a game load-time test featured in Final Fantasy: Stormblood.

The 960 GB BPX Pro scores right between the Adata SX8200 and Samsung 970 Pro. It doesn't win the test overall but staying within one-third of a second of the fastest drive on the chart is a strong position to be in. 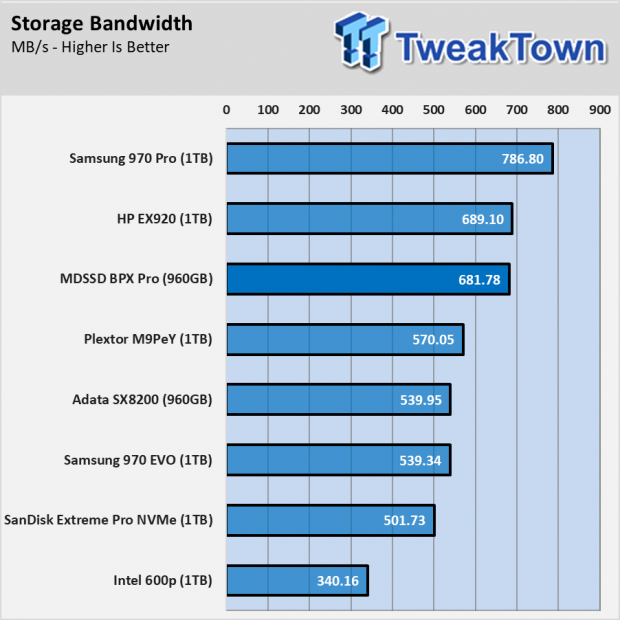 The PCMark 8 Storage Bandwidth Test uses nine applications to test ten common workloads that many of us run every day. In this test, the BPX Pro performs very close to the HP EX920 that costs nearly $50 more. The BPX Pro does outperform the Adata SX8200 in this capacity. 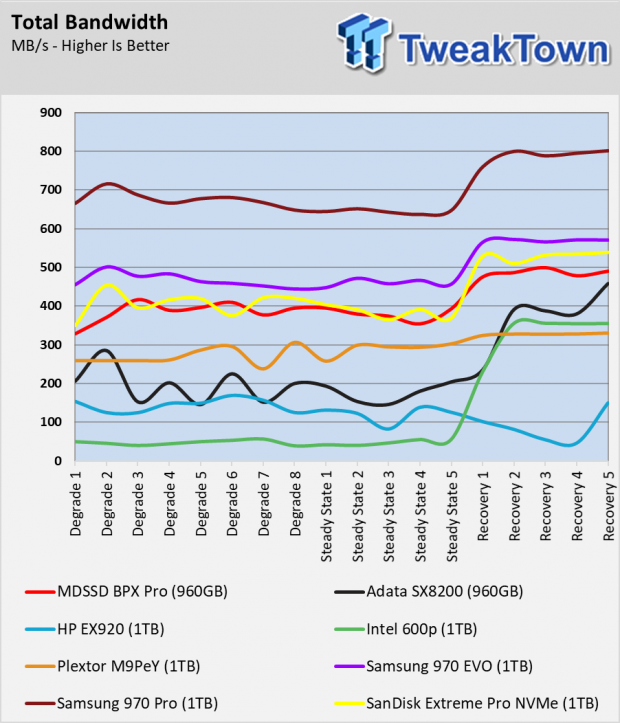 In the PCMark 8 Extended Storage Test that works the drives for nearly 24 hours, we see another aspect of performance. Like many of Phison's controllers, the E12 performs well under heavy write conditions. The drive takes a little longer to recover compared to some of the other drives. This has become common for drives that rely heavily on SLC cache. 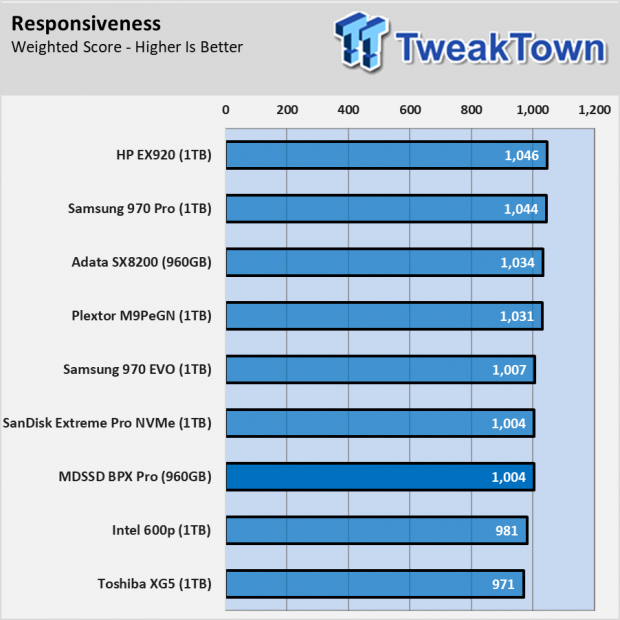 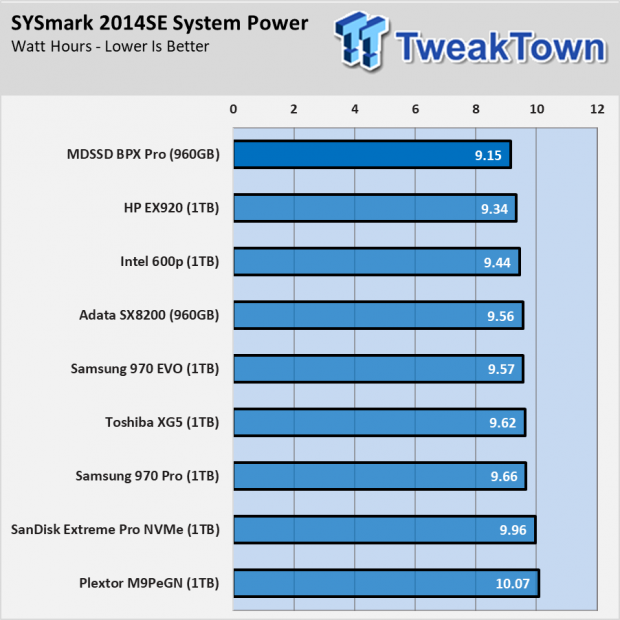 We're surprised to see the 960GB BPX Pro struggle in our BAPCo SYSmark Responsiveness test. The drive matches the SanDisk Extreme Pro NVMe with a score of 1,004 points. That trails the 970 EVO and SX8200, two products the BPX Pro outperformed through most of this review. 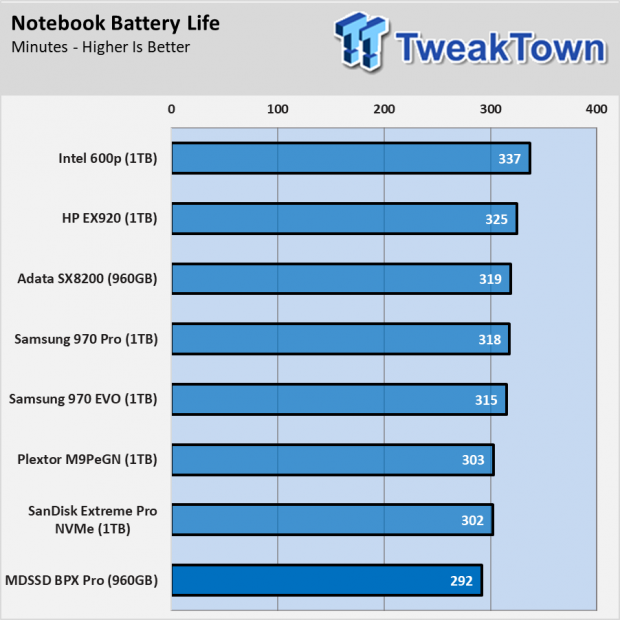 The efficiency didn't carry over to the battery test where the 960GB BPX Pro delivered just 292 minutes in the Y700-17 using MobileMark software.

The 1TB SSD market has several great options for us to choose from. The 960GB BPX Pro fits in with the top tier flash SSDs, but there isn't a clear winner.

The HP EX920 still edges out the other drives in this capacity, but you have to pay close to $50 more slight performance increase. The Adata SX8200 costs nearly the same as the BPX Pro in this size but doesn't perform as well in general applications. The 960 GB BPX Pro strikes an optimal balance between price and performance.

Later in the day, we will publish the results of the 480GB and 240GB models. The performance and pricing ratio changes with all three capacities so we implore you to check the results of all three reviews. Phison's performance carries well as the density shrinks. We can't say about that many of the other premium NVMe SSDs.

With the BPX Pro on the market, we should see even more price reductions as the other companies react. MyDigitalSSD has been a disruptor, and the BPX Pro is another link in the chain, but not in the 1TB size at launch. It's a very good drive but not as dominant as the original when it comes to market.