In 2007, CBS started a curious project of going back to the original film elements for the three seasons of the original Star Trek series (now known as The Original Series restoring the celluloid elements to their original luster and replacing the relatively infrequent exterior ship shots with newly created CG models.

The remastered Star Trek: The Original Series project was a major success, which allowed CBS an additional revenue stream by re-licensing the remastered series with new 16:9 widescreen transfers and selling the series once more on HD-DVD and Blu-ray formats.

It's been alleged that the remastering effort was in part financed by Toshiba in exchange for HD-DVD exclusivity. Ironically, the final two seasons were never released on the format - which was defunct by that time the project was completed.

When the news leaked that a Star Wars: Special Edition-esque remastering was on the cards, many fans were aghast. But once fans saw the rather loving (and conservative) conversion, the effort was lauded by most. Additionally, the Blu-ray version rather classily included the series with both the original and remastered visual effects. By the time the remastering effort concluded in mid 2009, rumours started to swirl that CBS and Paramount were interested in revisiting the sequel series; 1987's Star Trek: The Next Generation. 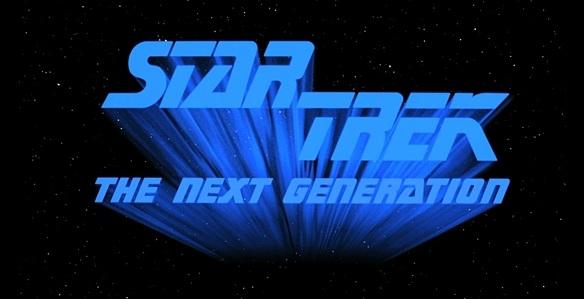 Allegedly, internal discussions at CBS centred on how far to take the project; upscaling the original NTSC masters tapes, transferring the film but inserting upscaled effects footage, or the full blown restoration that is currently in the works. By doing so, CBS chose the most expensive option, but also the one that fans will be most pleased with.

Last month, Paramount released a sampler Blu-ray disc in the United States and Europe entitled The Next Level, which shows off three remastered episodes from the series - the pilot "Encounter at Farpoint", "Sins of the Father" and "The Inner Light". The disc, released as both a demo to fans and as a way to generate some initial funds for the project, has sold in good quantities giving CBS the confidence to move forward on the series, with the plan to release two remastered full Blu-ray seasons per year until the full run of seven seasons is completed.

By transferring the original footage, kept in temperature controlled vaults built into a salt mine in Pennsylvania, CBS have pulled back a veil, unleashing the full potential of the image. The quality on offer is rather astounding and light years ahead of the previous masters as seen on DVD. There is a massive amount of detail and clarity to the image that simply was not available before - downconverted in a soft, hazy mess. Colours are much more vibrant and appropriate than before. Even the set lighting comes off as a little less 'daytime TV' like. There is a pleasing amount of fine film grain visible in the image, gently reminding viewers that the series was indeed filmed on celluloid.

Visual effects shots, which for the most part utilise the original 35mm model passes, have been fully recomposited and output in HD, seamlessly intercut with the newly transferred footage. In some shots however, CBS has opted to utilise new CG models and mattes. This has added significant cost to the remastering effort - it essentially means the effects are being built from the ground up. 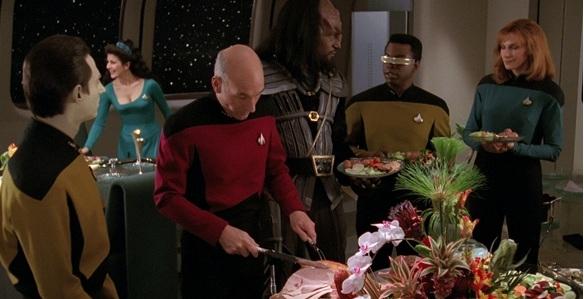 Not quite as impressive, but pleasing all the same is the newly created 7.1 audio mix, taking the 5.1 mix created for the previous DVD release a further step forward. Whilst the elements have not been completely remastered like the visuals, this attention to detail should certainly be noted.

My time with The Next Level sampler disc is not all perfection though - there are some rather frequent film artefacts, which show up as small white dots which mar the image more frequently than I would like. Perhaps by the time the complete first season is released, this may be rectified. It seems odd, and would not take many man hours to fix at all. 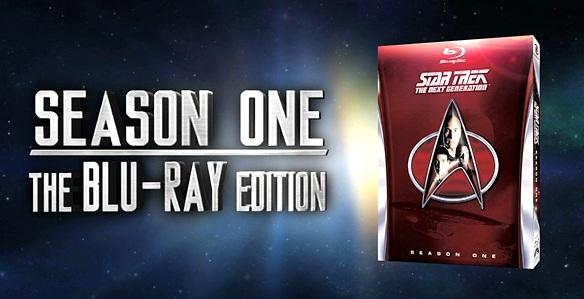 Despite this one complaint, the high definition premiere of Star Trek: The Next Generation is impressive. Very impressive. After years of getting fleeced with expensive VHS tapes that doled out 2 episodes per tape at a large price and the (initially) expensive DVD collections, Star Trek will be very pleased that they are finally getting something worthy of spending a bunch more cash on. I'll be sure to review Star Trek The Next Generation - Season One when it's released sometime in the third quarter of 2012.