HyperX Predator RAM has been around since the days of DDR3, and the design has not changed much since then. Of course, the DDR3 and early DDR4 variants are missing one significant change that the Predator RGB memory offers, and that is lighting of any sort. We still find the dual-layered heat spreaders with contrasting black metal sections, we still see the highly aggressive design and superb styling, but this time around, HyperX developed products geared to all of the RGB LED fans out there. There is no software from HyperX for this DDR4, but instead, they are designed to be addressed with ASUS Aura Sync, GIGABYTE RGB Fusion, and MSI Mystic Light Sync.

XMP profiles offered. If 16GB of 2933MHz DDR4 is not your thing, don't worry as HyperX has plenty of options. Starting at speeds of 2400MHz and ending at 3600MHz at this time, in densities from a single 4 GB stick all the way up to 128GB kits, HyperX has your needs covered.

There are not many companies out there that can pull off an excellent RGB implementation to their memory, as many have hot spots in the lighting, or the flow of colors is not the best. Where it used to be that G.Skill was the ultimate leader in this area, it appears HyperX is hot on their heels with some of the best lighting in the industry. You not only get outstanding styling appeal as soon as you open the packaging with the Predator RGB but once powered, you will find that Hyper hit the nail on the head and is a strong contender for your hard earned money. 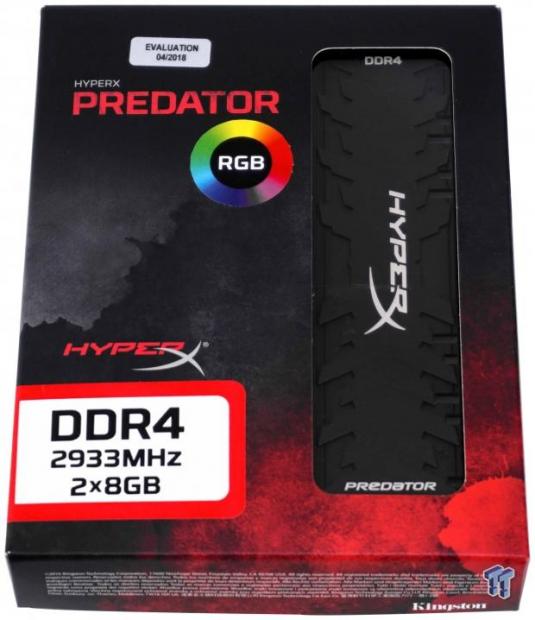 The box the RAM is shipped in is typical for HyperX with the black background and red highlights. At the top of the box, we see the HyperX Predator RGB name next to a window, so the RAM is visible upon purchase. At the bottom we can also see that this is a set of DDR4, it is 2933MHz, and there are two 8GB sticks inside. 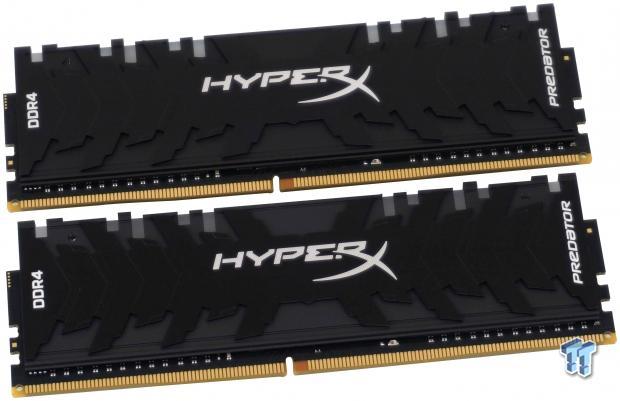 Fresh out of the box, the visual appeal of the Predator RGB becomes apparent. Not only is there a mix of textured black metal behind black brushed metal, the angles and shapes along the top are something not found in any other kit. The DDR4 and Predator are painted onto the spreaders, but the HyperX name in the middle is made of exposed metal with a fine-line pattern applied to it. 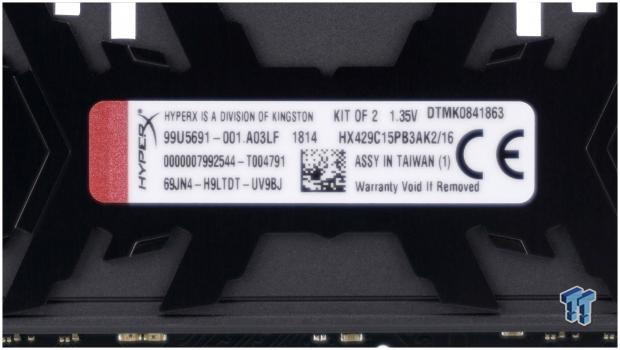 On the back of each stick, where the HyperX name is found on the other side, we now see the product sticker. It provides us with the fact that this is one of two parts in the kit, it runs at 1.35V, and we are also given the part number of the set.

Not only does the top edge of the Predator RGB have unique styling on the sides of them, but the design wraps around to the top as well, where small sections of metal cross over the light bar. The light bar also sports the HyperX name, so that when powered, it is easy to tell who makes the DDR4 running in the system. 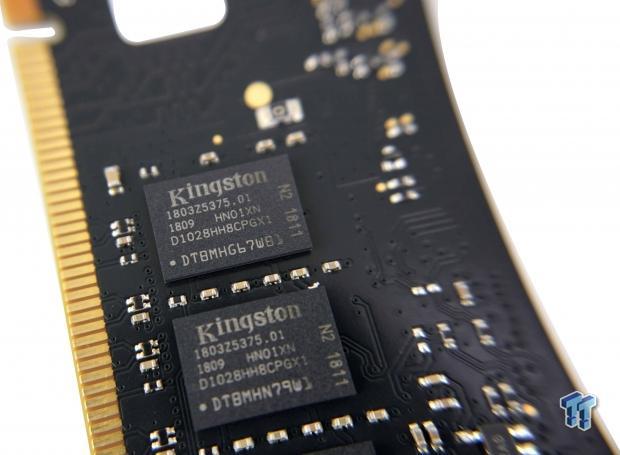 There are some hints as to the IC manufacturer, but Kingston is the name we find in bold letters on them. However, with use of Taiphoon Burner software, we were able to gather the information that these are Hynix H5AN8G8NMFR-UHC ICs. 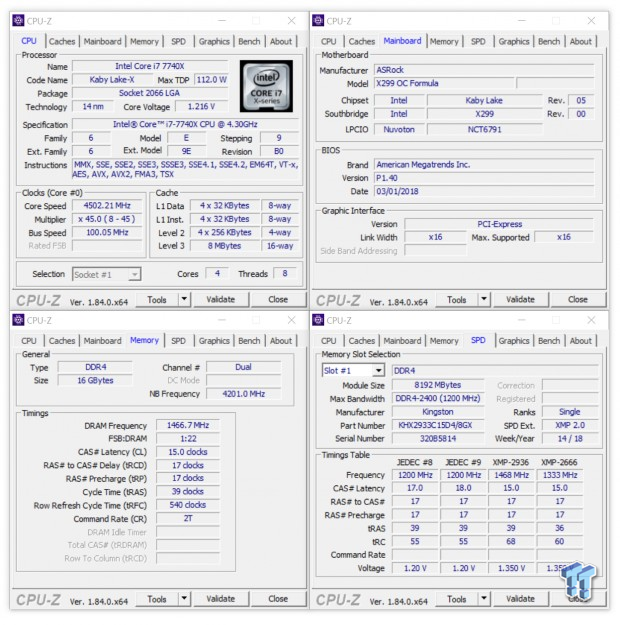 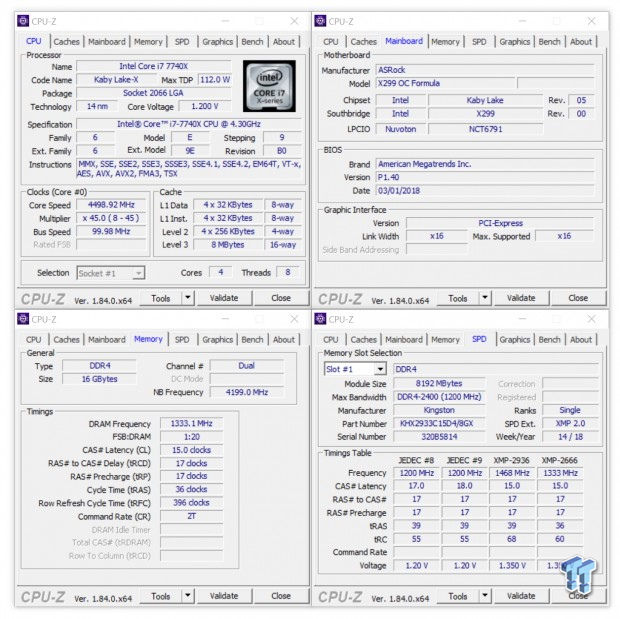 Built into the memory is also a second XMP2 profile, which lowers the speed to 2666MHz and the timings are similar at 15-17-17-36 2T. As for the voltages, nothing changes here, as they match the XMP1 profile settings. 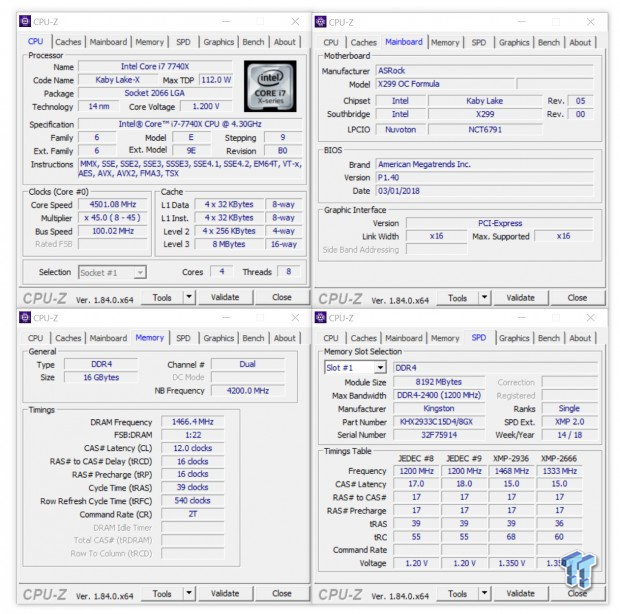 As we always do, we attempted to lower the timings of this Hynix based DDR4 and were surprised with what could be done. With little effort, we, while still at 2933MHz, were able to drop the timings to 12-16-16-39 2T. We did raise the VDIMM to 1.45V as well as adding 0.10V to both the VCCIO and VCCSA. 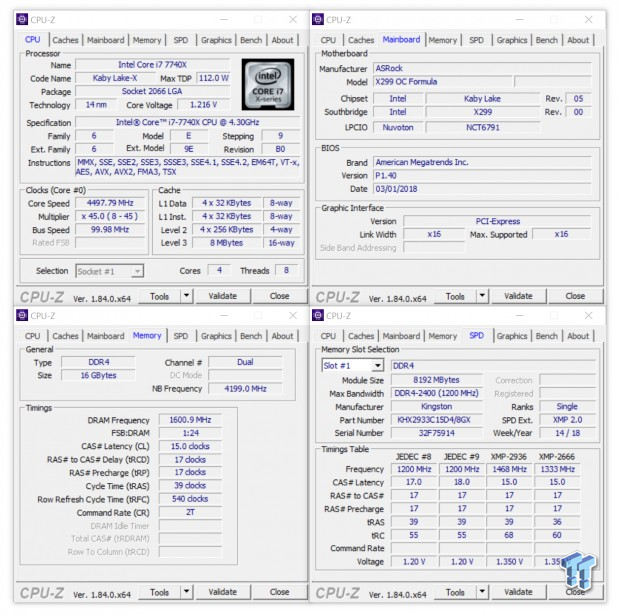 Pushing the Predator RGB for the top speed, we did see 3333MHz in windows, but it was not test-stable. However, with the same voltages used to lower the timings, we were able to test 3200MHz without any issues at all. This may not be the most significant boost in speed we have seen, but for Hynix memory, this is a decent bump. 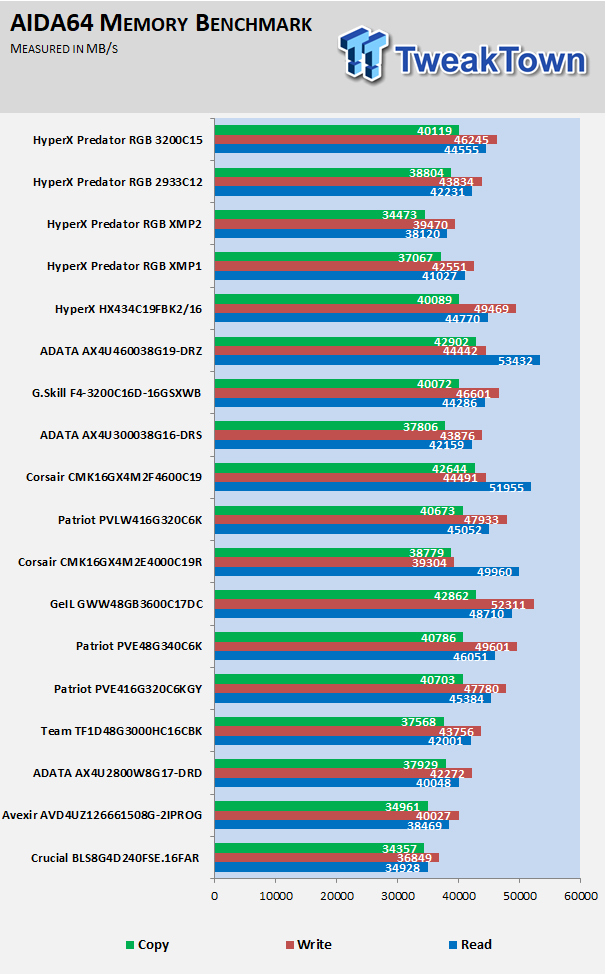 Without another 2933MHz kit to go head to head with, in this chart, we will be looking to compare with 2800MHz and 3000MHz kits. In that respect, the Predator RGB falls right between the ADATA and TEAM kits found closer to the bottom of the chart. The second XMP profile results in lower scores, as expected, but tinkering with the timings and the overall speed adds plenty of boost to the scores in all aspects of this testing. 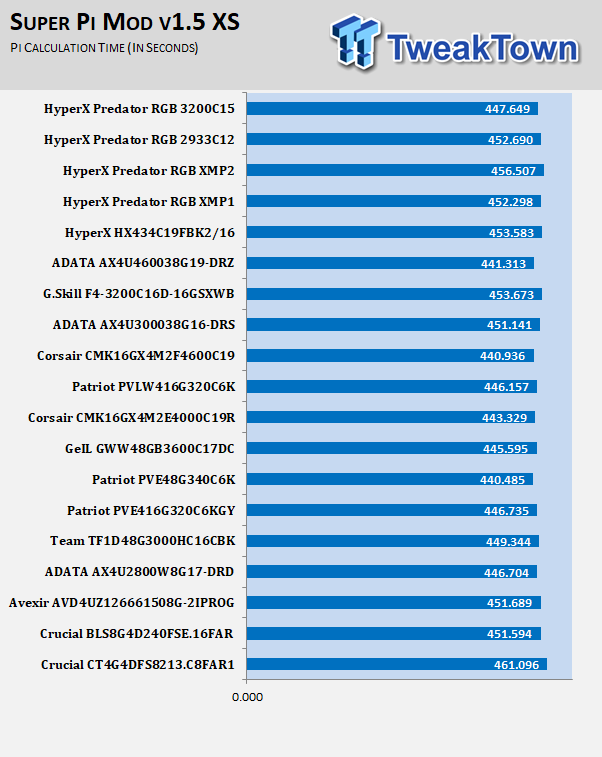 When it comes to Super Pi testing, we see that the Predator RGB falls behind the ADATA 2800MHz results, but is better than what we saw of the faster Fury RAM. Lowering the timings did not improve on time, but we do get some improvements opting for the 3200MHz overclock. 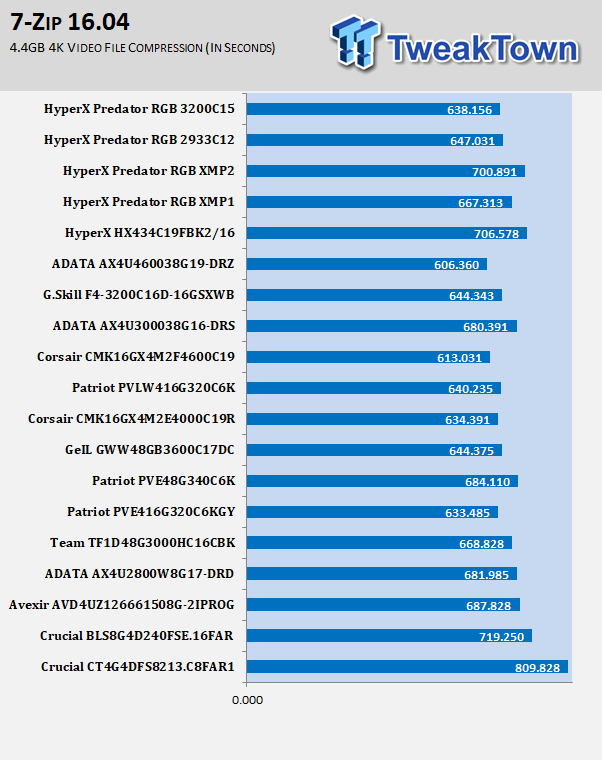 In compression testing, we find that the XMP1 profile delivers better results than some of the faster kits on the chart; however, the XMP profile lost to the same speed Avexir kit. We gained 20 seconds of time back by lowering the timings, and nearly 30 seconds opting for the speed overclock. Not too shabby at all.

First of all, and what sells many products in the PC environment is a stellar visual appeal, and this is something HyperX delivers in spades. Black heat spreaders on black PCBs is a terrific start. Dual layers of metal with contrasting finishes, unique shapes and layout of designs, and as you can see in the image below, once powered on, the Predator RGB LEDs have only G.Skill to compete with as far as that presentation goes. HyperX could have faltered on many aspects of its appeal, but instead, they went balls to the wall and delivered DDR4 that we know will appeal to not only the RGB lovers out there but also those who merely appreciate style as well. 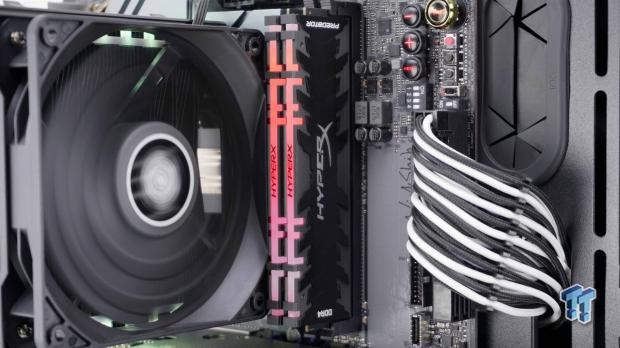 Of course, there are better ICs on the market to use, but opting for Hynix ICs did not stop the Predator RGB from impressing us. In two out of the three test suites, the Predator RGB handily beat its competition, and in the third, it is only just behind the results of others. On top of having multiple XMP profiles for reasons like a weak IMC or stability issues with higher speeds, the customer has options and can suit the RAM to fit their needs. Beyond that, there is still the potential to overclock this kit without much effort, and the overall speed boost is nice to have in reserve, but we honestly liked the flexibility in the timings too. Honestly, for those willing to push the boundaries a bit more than we do, the HyperX Predator still has more to give, but we err on the side of caution to provide easily obtainable results.

For those looking to obtain the Hyper X Predator RGB kit that we have, it can be purchased directly from the manufacturer, and there we see a price of $257. Currently, Newegg does not show any of the Predator RGB kits in stock, but we were able to locate this exact HX429C15PB3AK2/16 set for $245 on Amazon. This is where the bad news comes into play though. Anything else we see in 16GB kits of 2933MHz memory is more affordable, but on the flip side, they all run either CAS14 or CAS17, nothing is directly comparable in that sense. Out of the group we see, the HyperX Predator RGB is the most stylish of the bunch.

While the TridentZ RAM is appealing to the masses as well, we feel that HyperX has the edge over them, and if we were looking right now for a stellar looking kit with performance to back it all up, we would likely opt for the Predator RGB. That is saying a lot, as we are huge fans of G.Skill DDR4, and to get us to sway our vote is not something easily accomplished.

The Bottom Line: There may be more affordable options for similar DDR4, but none are as attractive or styled in a manner such as the Predator RGB. They deliver some of the smoothest color transitions available, the preformance is there, and we love what HyperX accomplished here!