Back in March 2008, before the release of the PlayStation 3 brought Blu-ray players into households in a huge numbers, TweakTown reviewed its very first Blu-ray release - Arnold Schwarzenegger's 1987 sci-fi action hit Predator. Fast forward six years and Twentieth Century Fox have re-released Predator twice; in a feature packed 'Hunter Edition' in 2010 and now in a stereoscopic 3D conversion. 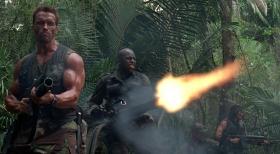 When a squad on U.S. Airmen fail to return from their deployment in the jungles of Central America, presumably kidnapped by local Guerilla militia, a team of commandos, led by Dutch (Arnold Schwarzenegger) are dispatched, alongside a contingent of the most powerful weaponry known to man. But slowly the team come to the realization that the hunters have become the hunted, by a blood sport hunting alien with weaponry and camouflage technologies far more advanced than their own.

Fox's newly produced stereoscopic 3D conversion, created using methods developed by JVC Kenwood to cut down on manual rotoscoping and used on other direct-to-video 3D conversions such as I, Robot and Jumper. Predator 3D is clearly a step below the best 3D conversions offered to the likes of Jurassic Park and Titanic. Worse, the efforts have been made on a transfer of the film that is deeply flawed and in dire need of a full negative restoration. 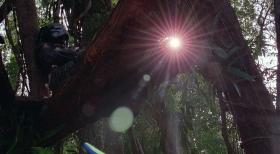 Predator has always been an extremely grainy movie, lensed on Super 35 stock and filmed in inhospitable locations with frequently poor lighting and often employing zoom lenses, which further compounds the situation. Sadly, rather than invest the funds to allow a restoration company such as Lowry Digital to properly manage the grain and other inherent problems in the inter-positive, Fox took the cheap route and lathered the transfer with a heavy dose of digital noise reduction. This has a significant and visible effect on detail and introduces a nauseating level of blur.

Color is quite good and some of the better lit jungle shots look quite impressive indeed, but then bookended by shots that look plain awful. It's a huge disappointment, especially with the assumption that the 3D work for this release would finally necessitate the full remaster that the film requires.

Regarding the 3D - it's surprisingly good. Sure, if you look closely you can see the seams and occasionally you can see where the algorithm and manual artists have blurred tricky edges and lazily extracted certain layers. They've also taken the opportunity to add digital flourishes such as additional pop-out sparks, which might annoy some purists, but to be fair, they'll be against the 3D conversion as a matter of principal anyway. 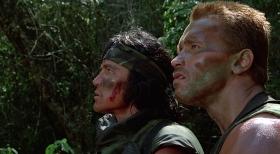 Featuring exactly the same audio mix as the previous two Blu-ray transfers, Predator is admittedly starting to sound its age - although to be fair, the film was only issued with a stereo track back in 1987.

Dialogue is mostly fine, only occasionally becoming difficult to hear. Some of the sound effects are a little harsh and brassy and the explosion sound effects a little hammy, but they're rendered reasonably well and spread over the main soundstage. The surround channels are used moderately and to best effect in jungle attack sequences. The low frequency channel is loud and booming, but is far less nuanced and detailed than what a modern mix offers.

Overall, Predator 3D features a 'good enough' mix that whichever way you cut it, is a product of 1980's audio technology. 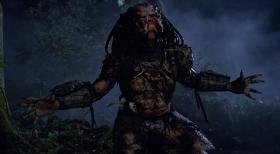 Sadly, despite the collection of extra features produced for the Ultimate Hunter Edition Blu-ray in 2010, Fox neglected to include this disc and any bonus features whatsoever. Fans will therefore need to hang on to the previous disc for the entire experience. For the sake of a dollar or two, this seems to be a poor decision on their behalf.

PRICING: You can find the Predator 3D Blu-ray for sale below. The prices listed are valid at the time of writing but can change at any time. Click the link to see the very latest pricing for the best deal.

United States: The Predator 3D Blu-ray retails for $19.99 at Amazon.