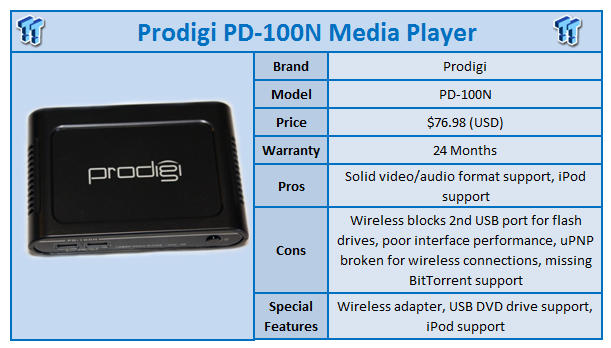 The PD-100N housing provides two USB ports, HDMI, optical out, and the old-school RCA video and stereo audio connections. The design is functional save for the spacing between the two USB ports on the front when coupled with the PDW-10N wireless adapter. This dongle is so large that it can overshadow the other port. For typical USB cables it's not that big of a problem, but forget about plugging in a flash drive when the wireless adapter is attached.

Having two ports on the front of a unit is great, especially for setups in which a hard drive will be attached a majority of the time. Having a second USB port means you can just plug in a flash drive for any kind of straggling media that you have laying around while not having to mess with moving a file onto the external hard drive that's connected, or having to switch connections. I can understand the desire to keep costs down by not building in the wireless option, but is there some reason why a third USB port on the rear of the player for this purpose is out of the question?

Booting the player for the first time prompted me to choose the resolution for my television (amongst 480, 720, and 1080i and 1080p options) and I was at the main menu screen with a minimum of fuss. Options are limited, however, and though the Prodigi website sports the Muzee logo, I could not find any option for it whatsoever. There's also a BitTorrent setting under the Setup menu that has no other function than either being turned on or off, which is quite odd. With no other connectivity options available, it's just you and your USB hard drive and/or networked computer to stem the tide of boredom.

To be fair, one of those USB connected options involves your iPod, which is a new feature that I wish more media players would support. Just plug it in and browse. As the iPod (and its many variants) is so ubiquitous these days, I'm surprised that this is the first time I've seen it. It worked well with one of the older iPod models, but not with my iPhone (even though plugging it into the USB port on the PD-100N allowed it to charge the battery). However, since the navigation through the menus is so bare-bones, it can be a pain if you have a lot of albums since moving down through the list requires you to push the down button on the remote control for every entry.

I hoped that holding the button down would allow me to quickly scroll through, but doing so does nothing at all to advance the list. There's also no way to "eject" the USB device, so when you plug your iPod in, you'll be prompted with a "Do not disconnect" notice on your iPod's screen. If you're uncomfortable with simply unplugging it after use, then you'll have to shut down the player in order for the notice to clear. 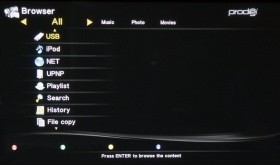 There's also purported "karaoke" support for files that are prepared as such (no removing vocals from normal music tracks), though I wasn't able to figure out how to make it work.

Installing a firmware update added additional support for playing DVDs via an external USB DVD drive, and yet there is no support for discs with CSS-based encryption. This means that almost every single retail DVD on the face of the planet is not supported by the player. You can play your own home movies or a copy you've made for backup purposes, but that's it. It would have been a nice addition given the lack of Internet streaming options, but is far too limited to be of use.


Speaking of updating the PD-100N's firmware, this is the first player I've encountered in recent memory which didn't allow for updating over the Internet. This means that in order to take advantage of any new features/fixes, you'll have to first download the new firmware from Prodigi's website, copy it to a USB stick, plug it into the unit, then unplug the power from the unit, hold down the "On" button, and plug the power back in. If that sounds convoluted, that's because it is. 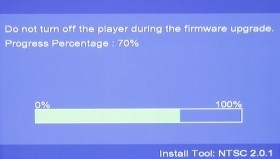 Navigating through your media is as basic as it comes, and yet frustrating at the same time. The combination of sluggish performance and a finicky remote means that trying to select and play a file could take multiple attempts. Like the brite-View CinemaGo, the PD-100N also has a "preview" feature that can also make navigation a chore, but even turning it off doesn't really help matters. I found myself often pressing the "Enter" button multiple times in order to start a video. In fact, when I first started using the unit, I was struck by the impression that it took a long time to load content when the problem was that it was simply not registering my remote commands.

Once you actually start playing a file, you'll find that the codec support is solid, if typical. With the exception of my (intentionally) problem QuickTime files and APE audio track, I didn't come across any media that the Prodigi had trouble with. MKV, Xvid/Divx, WMV (HD and SD), DVD ISOs, and even Flash video (FLV), it played them all. It took me a while to find out how to bring up a navigation interface (for chapter/time skipping) as most players have a dedicated button on the remote for just such a purpose. On the PD-100N's remote, the "Play" button brings up the menu, something that took looking through the manual to figure out. Unlike the interface, media playback is quite fast and I was able to instantly jump around the timeline within in the videos.

While the PD-100N works fine when playing off physically connected media, the UPnP support did not work for me at all under the wireless connection. I could see and navigate through the folders on my desktop PC, but selecting the media only caused the unit to freeze up for a minute or two and then nothing. Connecting via the wired Ethernet port allowed me to play files across the network, but I'd never had trouble doing this over a wireless connection before.

Using the NAS function you could copy the media from your networked PC or laptop to a connected USB drive, but the function is really quite a pain for anyone who is using the player in a wireless environment. Given the size of media files, it would be quicker to copy the files onto the USB drive yourself unless you have it hooked in via a fast wired connection.

For a basic player supporting a wide-variety of formats off of a USB drive, the Prodigi PD-100N does the job, though not without feeling fundamentally flawed. From poor interface performance to wonky networking and missing features, the player comes across as a good concept that fizzled before it actually reached end-users. New firmware could definitely fix a lot of issues, but its inability to auto-update means that some will be left out of any potential updates. Ultimately, it's hard to recommend this player, simply because there are so many better options available.