"With a clear focus on putting our players first, FY15 was an exceptional year for Electronic Arts. We introduced award-winning games, delivered enduring entertainment in our live services, and forged deeper relationships with a growing global audience across consoles, mobile devices and PC," said Chief Executive Officer Andrew Wilson. "EA continues to sharpen our focus and speed, and in the year ahead we will engage more players on more platforms with new experiences like Star Wars Battlefront, FIFA 16, Minions Paradise and more."

"Two years ago, we discussed a three-year plan to double non-GAAP operating margins to 20%," said Chief Financial Officer Blake Jorgensen. "Today, I'm happy to announce that we exceeded our goal a full year ahead of schedule. Looking forward, we anticipate continued earnings growth driven by our strong portfolio, investment in new IP, the market shift to digital, and on-going cost discipline."

News and ongoing updates regarding EA and our games are available on EA's blog at www.ea.com/news.

*On a non-GAAP basis 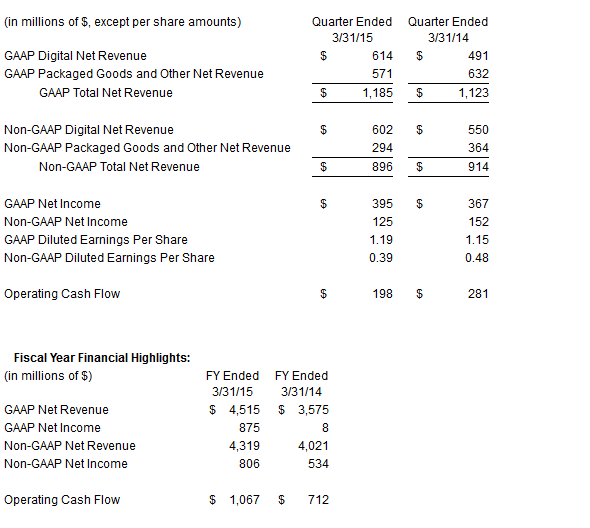 Under the program, EA may purchase stock in the open market or through privately negotiated transactions in accordance with applicable securities laws, including pursuant to pre-arranged stock trading plans. The timing and actual amount of the stock repurchases will depend on several factors including price, capital availability, regulatory requirements, alternative investment opportunities and other market conditions. EA is not obligated to repurchase any specific number of shares under the program and the repurchase program may be modified, suspended or discontinued at any time.

The following forward-looking statements, as well as those made above, reflect expectations as of May 5, 2015. Electronic Arts assumes no obligation to update these statements. Results may be materially different and are affected by many factors detailed in this release and in EA's annual and quarterly SEC filings.

Electronic Arts will host a conference call on May 5, 2015 at 2:00 pm PT (5:00 pm ET) to review its results for the fourth quarter ended March 31, 2015 and its outlook for the future. During the course of the call, Electronic Arts may disclose material developments affecting its business and/or financial performance. Listeners may access the conference call live through the following dial-in number: 888-469-0955 (domestic) or 312-470-7475 (international), using the password "EA" or via webcast at http://ir.ea.com.

EA will also post a slide presentation that accompanies the call at http://ir.ea.com.

Electronic Arts may consider whether other significant non-recurring items that arise in the future should also be excluded in calculating the non-GAAP financial measures it uses.

In addition to the reasons stated above, which are generally applicable to each of the items Electronic Arts excludes from its non-GAAP financial measures, the Company believes it is appropriate to exclude certain items for the following reasons:

Acquisition-Related Expenses. GAAP requires expenses to be recognized for various types of events associated with a business acquisition. These events include, expensing acquired intangible assets, including acquired in-process technology, post-closing adjustments associated with changes in the estimated amount of contingent consideration to be paid in an acquisition, and the impairment of accounting goodwill created as a result of an acquisition when future events indicate there has been a decline in its value. When analyzing the operating performance of an acquired entity, Electronic Arts' management focuses on the total return provided by the investment (i.e., operating profit generated from the acquired entity as compared to the purchase price paid including the final amounts paid for contingent consideration) without taking into consideration any allocations made for accounting purposes. When analyzing the operating performance of an acquisition in subsequent periods, the Company's management excludes the GAAP impact of any adjustments to the fair value of these acquisition-related balances to its financial results.

Amortization of Debt Discount on the Convertible Senior Notes. Under GAAP, certain convertible debt instruments that may be settled in cash on conversion are required to be separately accounted for as liability (debt) and equity (conversion option) components of the instrument in a manner that reflects the issuer's non-convertible debt borrowing rate. Accordingly, for GAAP purposes, we are required to amortize as a debt discount an amount equal to the fair value of the conversion option as interest expense on the Company's $632.5 million of 0.75% convertible senior notes that were issued in a private placement in July 2011 over the term of the notes. Electronic Arts' management excludes the effect of this amortization in its non-GAAP financial measures.

Change in Deferred Net Revenue (Online-enabled Games). The majority of our software games can be connected to the Internet whereby a consumer may be able to download unspecified content or updates on a when-and-if-available basis ("unspecified updates") for use with the original game software. In addition, we may also offer an online matchmaking service that permits consumers to play against each other via the Internet. GAAP requires us to account for the consumer's right to receive unspecified updates or the matchmaking service for no additional fee as a "bundled" sale, or multiple-element arrangement. Electronic Arts is not able to objectively determine the fair value of these unspecified updates or online service included in certain of its online-enabled games. As a result, the Company recognizes the revenue from the sale of these online-enabled games on a straight-line basis over the estimated offering period. Electronic Arts' management excludes the impact of the change in deferred net revenue related to online-enabled games in its non-GAAP financial measures for the reasons stated above and also to facilitate an understanding of our operations because all related costs of revenue are expensed as incurred instead of deferred and recognized ratably.

Income Tax Adjustments. The Company uses a fixed, long-term projected tax rate internally to evaluate its operating performance, to forecast, plan and analyze future periods, and to assess the performance of its management team. Prior to April 1, 2013, a 28 percent tax rate was applied, and from April 1, 2013 until March 31, 2015, a 25 percent tax rate was applied to its non-GAAP financial results. Based on a re-evaluation of its fixed, long-term projected tax rate, beginning in fiscal year 2016, the Company will apply a tax rate of 22 percent to its non-GAAP financial results.

Loss on Licensed Intellectual Property Commitment. During the first quarter of fiscal 2015, Electronic Arts terminated its right to utilize certain intellectual property that the Company had previously licensed and we incurred a loss of $122 million on the corresponding license commitment. This expense is excluded from our non-GAAP financial measures.

Restructuring Charges. Although Electronic Arts has engaged in various restructuring activities in the past, each has been a discrete event based on a unique set of business objectives. Each of these restructurings has been unlike its predecessors in terms of its operational implementation, business impact and scope. As such, the Company believes it is appropriate to exclude restructuring charges from its non-GAAP financial measures.